Obama to Critics: If You Think U.S. ‘Inherently Racist,’ Why Bother Trying to Change It?
VIDEO

Obama to Critics: If You Think U.S. ‘Inherently Racist,’ Why Bother Trying to Change It? 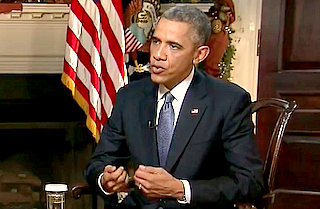 President Barack Obama described himself as “impatient” for more progress on race relations in the U.S., but pushed back against critics like Tavis Smiley who have criticized him for telling the African-American community to wait on said progress.

“There’s no reason for folks to be patient. I’m impatient,” Obama said to CNN’s Candy Crowley in an interview that aired Sunday morning.*

“On the other hand, I think an unwillingness to acknowledge that progress has been made cuts off the possibility of further progress. If critics want to suggest that America is inherently and irreducibly racist, then why bother even working on it? I’ve seen change in my own life, so has this country. And those who will deny that I think actually foreclose the possibility of further progress rather than advancing it.”

Obama acknowledged the anger over the deaths of Michael Brown and Eric Garner and indicated they were hardly isolated cases, merely the ones that had gotten attention.

“When you look at what’s happened in law enforcement across the country over the last several years, that’s not news to African-Americans,” he said. “What’s different is simply that some of it is now videotaped and people see it. And the question then becomes, you know, what practical steps can we take to solve this problem. I believe that the overwhelming majority of white americans, as well as African Americans, want to see this problem solved. So I have confidence that by surfacing these issues, we’re going to be able to make progress on them.”

* The interview was taped Friday, before last night’s killing of two NYPD officers.