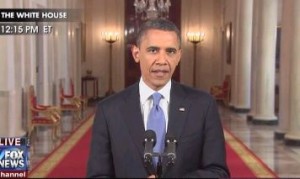 President Barack Obama addressed Thursday’s Supreme Court ruling that kept the health care law in place. He said that the law is important and will let improve health insurance for millions of Americans. Furthermore, the concept of covering the uninsured with a mandate was once supported by many bipartisan legislators – including his Republican presidential opponent, former Massachusetts Gov. Mitt Romney.

President Obama said that the Supreme Court ruling today has “reaffirmed a fundamental principle, that here in America – in the wealthiest nation on earth – no illness or accident should lead to any family’s financial ruin.”

The President said that there will be political discussions about the Court’s ruling, but “that discussion completely misses the point.” He said that the true victors in this decision are the American people.

He went on to describe the benefits of the Affordable Care Act for the millions of uninsured Americans the law is intended to help. He said that 215 million Americans who have insurance will keep their insurance—“this law will only make it more secure and more affordable.”

President Obama said that insurance companies cannot discriminate against preexisting conditions and will allow individuals to stay on their parents insurance up to the age of 26. He said 5 million seniors have received a three-figure discount on their medical services because of the Affordable Care Act.

“By this August, nearly 13 million of you will receive rebate from your insurance company because it spent too much on things like administrative costs and CEO bonuses and not you’re health care,” said Obama.

Furthermore, starting in 2014, the uninsured will have access to an “array of quality, affordable private health insurance plans to choose from.”

He said that states have the leeway to craft their own insurance exchanges under the law – women and those with preexisting conditions will remain protected.

Obama said he was reluctant to conclude the provision, but it was necessary and – at one point – supported by members of both parties including Romney when he was the governor of Massachusetts.

“I didn’t do this because it was good politics,” Obama concluded. “I did it because I believed it was good for the country.” He concluded by telling the story of a woman who fell through the cracks and was nearly bankrupt by her health care coverage after she received treatments for cancer.

He said that it is now time to move forward and implement and improve on the health care law and refocus on the economy, the debt and the confidence of the American people.