Obama Warns of Financial Tumult: Markets ‘Should be Concerned’
video

Obama Warns of Financial Tumult: Markets ‘Should be Concerned’ 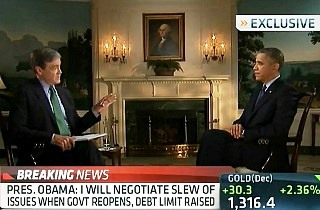 During an interview with CNBC, President Barack Obama told NBC News reporter John Harwood that financial markets “should be concerned.” Asked about the apparent lack of concern over the government shutdown displayed in the stock market, Obama said that he spoke with individuals in the financial industry and warned them of the grave consequences of default if the debt ceiling is not raised.

“Wall Street’s been pretty calm about this,” Harwood said. “The reaction, I would say generally speaking, has been ‘Washington fighting, Washington posturing, yadda, yadda, yadda.’ Is that the right way to look at it?”

“No. This time’s different,” Obama replied. “I think they should be concerned.”

Obama said that he discussed with some influential members of the financial industry just how dangerous the present standoff is and what could happen if it bleeds into the middle of the month when the government needs to raise the debt ceiling.

RELATED: Liberals Will Cringe, But Obama Must Offer GOP a Face-Saving Way Out of Crisis They Created

“One thing I often hear is, ‘Well, Mr. President, even if they’re being unreasonable, why can’t you just go ahead and do something that makes them happy now?’” Obama continued.

“Or the constitutional option,” Harwood suggested, referring to the president’s ability within the 14th Amendment to the Constitution which some says allows the executive to unilaterally raise the nation’s debt ceiling.

“What I have to remind people is what we’re debating right now is keeping the government open for two months,” Obama continued. “We would then be going through this exact same thing in the middle of Christmas shopping season.”

Obama said that he wants to help Congress “break” the “fever” of “governing from crisis to crisis.”