Obama Warns of Global Threats and Why We Should Ignore Them

Obama Warns of Global Threats and Why We Should Ignore Them 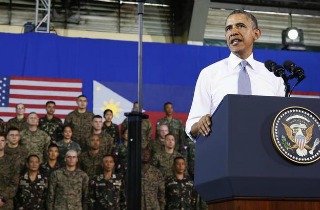 In his speech to West Point’s graduating class of 2014, President Barack Obama offered a grim global threat assessment for the near future. In what might be his most comprehensive, doctrinal address on America’s approach to foreign affairs yet, the president did not shy away from identifying the risks to national security and America’s position as guarantor of the international order. Obama made a compelling case for why America’s political, economic, and military leadership is critical in the 21st Century. Throughout, however, Obama also maintained that this leadership would and should not be forthcoming.

The president surely hoped to walk away from the speech having defined an enduring doctrine which would make clear Obama’s seemingly ad hoc approach to foreign affairs. After more than a decade of war, Obama proclaimed, a new more cautious era had dawned in which the use of American power would be prudently restrained. “Just because we have the best hammer does not mean that every problem is a nail,” the president declared.

Cycling thorough each of the world’s brewing or raging battles, the president spent the majority of his address contradicting what he hoped would be his central theme: the need for a strategic scaling back of America’s use of hard and soft power abroad. The supposed successes Obama cited to justify retrenchment abroad actually had the opposite effect. The president warned of the world’s smoldering or conflagrating conflicts, each of which threaten to derail America’s presently detached approach to foreign affairs.

That must be news in the Kremlin. The isolated Russia has managed to annex the Crimean peninsula, destabilize Ukraine, create a de-facto Russian sphere in the eastern part of the country, and reemerge as a political pole competing with Washington and Brussels for influence. As an added benefit, the Russian gambit has defanged the U.S. State Department which is forever warning of stronger actions to follow Russia’s unending series of aggressions while simultaneously hyping its own imagined successes as a deterrent force.

“We don’t know how the situation will play out, and there will be grave challenges,” Obama said. “But standing with our allies on behalf of international order has given a chance for the Ukrainian people to choose their future.” In reality, America allowed the most serious test to the post-Cold War international order to go virtually unchallenged.

“In the Asia Pacific, we are supporting Southeast Asian nations as they negotiate a code of conduct with China on the South China Sea, and are working to resolve territorial and maritime disputes through international law,” Obama stressed. If only China was cooperating. Instead, the People’s Republic is waging what looks like a sub-rosa naval war with Vietnam, laying claim to disputed islands in the South China Sea, and making America’s allies in the Philippines and Japan openly nervous.

Terrorist threats from non-state actors, Obama added, continue to represent the clearest threat to American national security “for the foreseeable future.” But here, too, Obama undermined his own argument for American retrenchment. In Syria, where the president set and ignored a “red line” for action in 2012-2013, Obama committed to training Syrian rebels and providing that country’s neighbors with assistance to “confront terrorists working across Syrian borders.” While withdrawing troops from battlefields across Asia, Obama pledged to create a $5 billion program for other nations “which will allow us to train, build capacity, and facilitate partner countries on the front lines.” That doesn’t sound like a mandate for retrenchment to me.

Obama even ballyhooed the opening of the formerly closed and stubborn nation of Burma to the West. “Progress could be reversed,” the president asserted. “But if Burma succeeds, we will have gained a new partner without having fired a shot.” Tell that to the political dissidents who emerged from hiding amid promises of openness, only to be arrested and detained indefinitely.

But after outlining these threats and America’s commitment to ignore them or outsource dealing with them to foreign governments, Obama tackled the real, preeminent threat of our age: climate change. Urging America’s opposition party to embrace unilateral actions to address this issue, Obama said that “American influence is always stronger when we lead by example.”

Nonsense. Only Beijing would have mixed emotions about America unilaterally surrendering its role as unmatched economic juggernaut, and only then because of the reduced American consumption fueling China’s growth. If climate change is a pressing global problem, then it is a diplomatic problem and this administration has failed to craft an acceptable diplomatic solution on multiple occasions.

But the invocation of the threat of climate change is revealing of the president’s domestic political problem: this was a speech delivered by the head of a government which is torn and confused.

This administration struggles with the imperative of America’s continued global supremacy and the necessity that U.S. power fill every vacuum on earth so as to forestall the rise of competing poles, but it cannot bring itself to make this case to a war-weary American public. This president – swept into power on a wave of anti-war sentiment – cannot tell these unpleasant truths to the American people and risk losing any more of their love, even if that means gaining their trust.

So Obama defines America’s threats and assures the public that they are being addressed. All the while, he outlines a misleading vision of the United States retreating from an ungrateful world. It is a message that seduces the American public, but it is a lie.

It also evinces Obama’s willingness to shift the burden of leadership from himself and onto his subordinates. Underscoring his own disinclination to execute his role as commander-in-chief, Obama even spelled out in no uncertain terms that he intends to divorce himself from accountability for future military actions.

“I also believe we will be more transparent about both the basis for our actions, and the manner in which they are carried out – whether it is drone strikes, or training partners,” Obama said. “I will increasingly turn to our military to take the lead and provide information to the public about our efforts.” Especially if something goes wrong.

It has become a cliché in modern punditry to suggest that President Obama abstains from the demands of leadership. But this speech reaffirms why clichés are also truisms. Obama chooses not to lead on the foreign affairs front, but to be led by events. This, the waning years of his presidency have made clear, is the Obama doctrine.