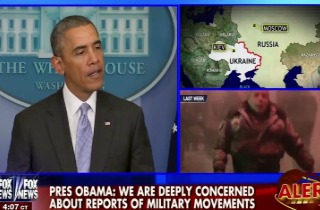 On Friday afternoon, President Barack Obama addressed the unfolding situation in Southern Ukraine, where reports indicate that Russian forces took control of strategic positions. Russian forces are also said to have surrounded the state television station in Crimea and cut off the peninsula from the rest of the country. Obama said Russia’s violation of Ukraine’s sovereignty was “deeply destabilizing.”

“Throughout this crisis, we have been very clear about one fundamental principle: the Ukrainian people deserve the right to pursue their own future,” Obama began.

Obama said he spoke several days ago with Russian President Vladimir Putin recently, and that his administration has communicated to Russia that they can be a part of Ukraine’s future.

“However, we are now deeply concerned by reports of military movements taken by the Russian Federation inside of the Ukraine,” Obama added. “Any violation of Ukraine’s sovereignty and territorial integrity would be deeply destabilizing, which is not in the interests of Ukraine, Russia, or Europe.”

“There will be costs for any intervention in Ukraine,” he continued.

Obama added that such actions by Russia would be a violation of international law and of treaties to which Russia is signatory.

Watch the address below via Fox News Channel: