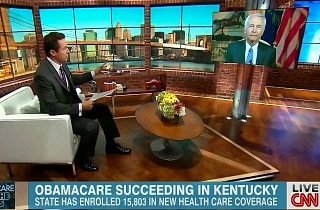 Conservatives are pretty much inured to negative media coverage of their preferred causes and the candidates they field to advance them. They are often irked by the media’s excessive and often negative focus on Republicans, but few are caught off guard by it. But when Democrats earn the scorn of the press, it is almost always a shock to their systems. This week is shaping up to be a bad week for Democrats in the media – the first in some time. Predictably, partisan liberals just can’t handle it.

22 days ago, the health insurance exchanges, a key element of the Affordable Care Act, went live. Simultaneously, the federal government shutdown as Republicans in Congress mounted a frantic, last-ditch effort to delay the law’s implementation. The news media concerned themselves far more with the shutdown than they did the faltering exchange, insurance cancellation messages, and rising premiums for those who already have coverage.

Outside of the occasional and perfunctory story devoted to stating for the record that the exchanges were a disaster, the press consistently reminded audience and guest alike that they would be covering the ACA roll-out debacle more if only the GOP had not shut down the government. Well, the government is now open, the debt ceiling crisis is behind us, and all those checks written during the course of the 16-day shutdown have come due.

On Monday, President Barack Obama kicked off the media’s coverage of the ACA disaster by taking to the Rose Garden to briefly acknowledge that Healthcare.gov was not functioning properly. He then transitioned into a tone-deaf pep talk designed to reassure his and the law’s supporters that the logic of creating a system in which young, healthy people must voluntarily consent to paying higher premiums in order to support the health care needs of the needy was sound.

Monday was the first day in which the media as an institution collectively took a discerning look at the health care law’s roll-out and they did not like what they saw. That single day of critical coverage of the ACA roll-out has been enough to shake the confidence of ACA supporters who are now scolding the media for not reserving judgment in perpetuum.

“Let me give a piece of unsolicited advice to the critics and, honestly, to the news media: take a deep breath,” Kentucky Gov. Steve Beshear told CNN New Day host Chris Cuomo on Tuesday. “This system is going to work.”

“The only thing that really isn’t working right now on the federal level is the website,” he continued. “I’ll guarantee you that whether it’s a week from now, a month from now, two months from now, they’ll get it up and working.”

He’s right: there isn’t a website on earth that cannot eventually be fixed. But his assessment that a failed site that is not properly functioning two months from now is not a complete and utter disaster is incorrect. Common sense suggests that the only people committed enough to navigate the exchanges and successfully sign up for the ACA are those that need it most; e.g. those who require financial assistance. In just under two months, those claims will be processed and the claimants will have insurance. They will need the healthy and uncovered to sign up for insurance to support them. Without them, the ACA’s “death spiral” begins. All is not well.

“This is going to work and everybody just needs to chill out a little bit,” Beshear concluded on Tuesday. Maybe he should be doing a bit more panicking himself rather than scolding the news media for acknowledging the obvious.