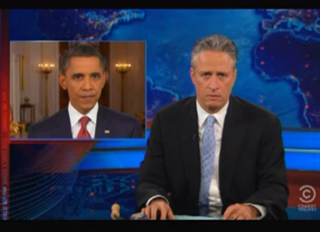 President Obama’s speech on the debt ceiling debate seems to have not made anyone feel more secure as the impending deadline for America to default on its debt inches closer. Among those still worried is Jon Stewart, who enthusiastically brandished a hammer and sickle at the President for his calls to raise taxes on the rich, but found himself disillusioned at the rallying cry to call Congressmen and encourage them to compromise: “Did the President just quit?”

Stewart made a few jokes at the expense of the East Room hallway– “We Killed Bin Laden Lane”– and at the horrible “noise coming out of Washington, D.C.” the President described as “debate.” He then embellished the President’s argument that the richest in the nation need to pay more taxes with a hammer and sickle that he could barely hold up. “Communism is heavy! I had no idea how much strength it took to be a communist!” In a fit of proletarian fervor, he awaited the instructions for revolution. Instead, President Obama demanded America “call your Congressman.” “Did the President just quit?” he asked, somewhat dejected, comparing the situation to “a restaurant where you make your own pizza,” or that moment when the family is late for a function, “dad locked himself in the bathroom,” and your mom turns and asks you to get him out.

Then Stewart turned to “the world’s saddest tangerine,” Speaker of the House John Boehner, and the myriad catchphrases he employed in his speech. He particularly took issue with Speaker Boehner’s claim that the stimulus debate provided late night comedians much fodder– “yes, the stimulus bill gave us so much material,” Stewart deadpanned. “You think comedians enjoy fiscal incompetence.” Then he turned to an actual story comedians would prefer to talk about, rather than the stimulus bill– say, a Congressman in a tiger suit.