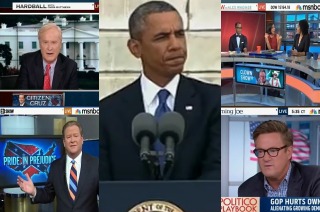 On Wednesday, President Barack Obama took to the steps of the Lincoln Memorial to mark the solemn occasion of the 50th anniversary of the civil rights movement’s march on Washington D.C. and Dr. Martin Luther King Jr.’s famous “I Have a Dream” speech. Obama’s performance was strong – speechifying is one of his most polished skills – but the substance of his address was also worth examining. It was as important for what concepts it embraced as those notions it rejected.

The president spent most of the opening of his speech reverentially recalling the oppression and struggles overcome by the civil rights movement’s activist leaders and followers alike. He touched on the lives taken by the hands of the hateful in that tumultuous period, and the tirelessness of the civil rights leaders who surmounted that great injustice to change America and the world.

It was a broad speech. It was not overly political or myopically focused on the small issues which dominate political debates on cable news today. It was a historic speech, spanning generations and crossing arbitrary national boarders to appeal to a common humanity. It was very much a speech that King would have appreciated had he lived to see the nation’s first black president pay tribute to his legacy.

Then Obama admonished and repudiated those who say that “little has changed” in the 50 years since MLK spoke on those steps. He said that to declare complete racial equality had been achieved would also dishonor the memories of those who died seeking to achieve it.

“We’ll suffer the occasional setback, but we will win these fights,” Obama said. “This country has changed too much. People of goodwill regardless of party are too plentiful for those with ill-will to change history’s currents.”

Yes, the president spoke to his base. He spoke of the growing wealth gap between blacks and whites, high unemployment among minorities, poor schools, overcrowded prisons, his embattled health care reform law and, of course, his political opponents who stand in the way of civic progress as he defines it. It is forgivable for the president to take such an anticipated opportunity to advance his own political agenda – nearly any competent politician would.

In general, though, when the president took on the issue of race he was responsible, dignified, and optimistic. Obama advocated for overcoming bigotry and rejecting excuse for allowing families to fragment and children to go uneducated and unsupervised. He was a role model for the next generation in that moment on the steps of the Lincoln Memorial.

It was a soaring speech deserving of praise. But contrast the president’s address with the smallness of some of his most dedicated supporters on MSNBC – some of whom spoke at that podium just hours before the president took the stage.

This morning, previewing the day’s speeches, MSNBC host Chris Matthews expressed his hope that the speakers – including the president – would lash out at the subtle racist attacks he sees constantly directed at the president. He attacked Republicans by name as being culpable in attempting to delegitimize the president – among the offenses Matthews listed in the past as efforts to strip Obama of his legitimacy are his opponents calling him by his name.

On Tuesday, MSNBC host Ed Schultz spent the majority of his program indicting conservatives across the United States for inciting “hate” in talk radio and on television. He linked right-leaning media to the planned establishment of a neo-Nazi camp in South Dakota, the refusal by a restaurant to serve a black family out of fear, and state-level voter identification laws as evidence that racial progress for blacks is in retreat. All this, behind a graphic of a map of the U.S. overlaid with a Confederate flag. When a viewer sent in a question asking if the GOP is “itching” for a “race war,” Schultz got cold feet and noted that the media has a responsibility to “tone things down.”

Schultz was merely taking a sentiment expressed by MSNBC host Joe Scarborough to an ill-advised but logical extreme. On August 16, Scarborough said that the opposition of some conservatives to legalizing gay marriage and Congressional Republicans’ objections to the Senate’s immigration reform proposal are antagonizing minorities. Further, conservative talkers on talk radio and cable news are, in his opinion, sending out “signals.” “If you’re not white, you’re really not welcome in this party,” Scarborough insisted.

Schultz’s attempt to create the impression that every problem the black community faces (which are often problems faced by Americans in general) is racial was echoed by MSNBC host Touré on August 26. “Guns, the welfare state, voting rights, immigration,” among many others, represent areas of public policy in which subtle racism plays a role. Of course, the racially ignorant or discriminatory position on each of these issues is the Republican position.

Advocates of 2nd Amendment rights are often seen to be nursing a latent strain of racism by the cable news network’s hosts and contributors. MSNBC’s go-to guest host, Joy-Ann Reid, insisted that a “neo-confederate thread” permeates the thinking of gun rights supporters. Never mind that gun control was a favored method of legitimate Confederates to keep firearms out of the hands of African-Americans, or that deference to the Constitution’s supremacy was hardly a Confederate value.

The verdict in the trial of Trayvon Martin continues to serve as a racial grievance which MSNBC’s hosts and guests rally around. Amid a detestable segment on August 23 linking the killing of Martin — a killing without any empirical evidence to support the claim that his killer was moved by racial animus — to the torture and murder of Emmett Till, one MSNBC guest asserted that the GOP has become a ‘white nationalist, Afrikaner, Boer party.” What does one have to do with the other? Only the fevered minds at 30 Rock could answer that.

Of course, Bill O’Reilly daring to note the disproportionate rate of violent crimes committed by young African-American men represents “puerile racism.” Arizona Gov. Jan Brewer’s finger wag at the president in 2010 was “racist.” A rodeo clown who wore an Obama mask was an incredibly racist act of modern “minstrelsy.”

And these are only a few examples of MSNBC’s editorial take on race from August alone.

The 2012 presidential campaign was an especially educational romp through the energetic imaginations of professional racial victims. Far too many examples of egregious exaggeration and inference occurred on that network over the course of that election cycle to cite here, but suffice it to say that Chris Matthews’ insistence that Mitt Romney’s very decision to challenge Obama for the office of the presidency carried racial implications is all you need to know.

Earlier this month, Matthews insisted that President Barack Obama’s decision to give MSNBC a wide berth was evidence for him that his network was not as biased as its reputation suggests. But Obama’s speech today suggests that the president does not want anything to do with the agitation practiced on that network.