Dana Perino: Obama’s Second Term Will Be Rocky Because His Cabinet Picks ‘Have Not A Single Friend’ In D.C.
video

Dana Perino: Obama’s Second Term Will Be Rocky Because His Cabinet Picks ‘Have Not A Single Friend’ In D.C. 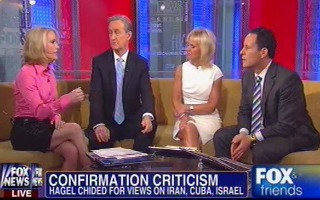 Does President Barack Obama have a proclivity for nominating the friendless to positions within his Cabinet? That’s what Fox News Channel’s Dana Perino told the hosts of Fox & Friends on Wednesday. Perino said that anyone would be hard-pressed to find a person who did not have “a single friend” in D.C., but the president has somehow managed to assemble a team of the unloved for his second term.

RELATED: Dana Perino: Republicans Boehner And McConnell ‘Most Like The Adults’ In Fiscal Cliff Fight

“President Obama, in a second term, had this great opportunity to announce a fresh, new, thoughtful national security team, and it’s been botched from the very beginning – starting with Susan Rice,” Perino said.

“Why would the president expend political capital on these choices,” Gretchen Carlson asked. “I don’t think he’s changed so much from his first term.”

Perino said that Obama has “enjoyed” the counsel of Chuck Hagel and John Brennan, his choices for Defense Secretary and CIA Director respectively. “He personally likes them and maybe he feels like that would be the best choice,” Perino added.

“To me, this choice was very curious because there’s not that many people in Washington who could name not a single friend in all of the city,” she continued. “There’s a couple people that were nominated. One has withdrew – that’s Susan Rice. By all accounts, she had not made friends.”

“You don’t have to make friends to be a great Cabinet Secretary, but he is going to have trouble in his second term being able to advance an agenda, being able to get things done, and you have to have good relationships with Congress,” Perino concluded.