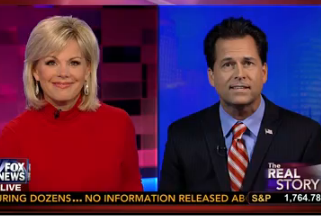 Well, this is awkward. President Obama’s second cousin once removed, Dr. Milton Wolf, appeared on Fox News’ The Real Story with Gretchen Carlson Monday afternoon to speak out against the Affordable Care Act and take some personal shots at his estranged family member. “They say you cannot choose your own family,” Wolf said. “But you can choose to rise up and stop your family from destroying America.”

If things go his way, Wolf could eventually come face-to-face with his cousin in the halls of Congress. He has just announced a plan to challenge incumbent Sen. Pat Roberts (R-KS) from the right in the 2014 primary. “The sad thing is about Barack Obama, and I don’t mean anything personal against him,” Wolf continued, “but he doesn’t understand America. At least he doesn’t understand American Exceptionalism. What makes America exceptional is that unlike other countries around the world, our citizens are sovereign. You know, the power in America should reside in the people. And our government needs to relearn its place as servant rather than master.”

Wolf said that he’s said as much to his cousin’s face, noting that “there are probably few people in this world who have looked Barack Obama in the eye and stood toe-to-toe and told him he’s wrong,” something that should give the tea party candidate some added credibility with his base in next year’s primary.

Wolf began speaking out against Obamacare on Fox as early as March 2010, when he appeared as a health care expert on Hannity. He has clearly strengthened his talking points since that interview, getting the seal of approval from Carlson, who called him a “good politician” who “knows how to talk.”