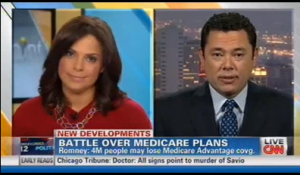 On Friday, Starting Point host Soledad O’Brien spoke with Congressman Jason Chaffetz about Medicare, the discussion eventually turning into an argument about what, exactly, constitutes a voucher where health care is concerned.

Chaffetz reiterated the argument that President Obama essentially cut over $700 billion from Medicare to fund his own ObamaCare plan, prompting O’Brien to note that “we have had this conversation 15 times at least.”

“As you know,” she told him, “it’s not taking money out of Medicare. It’s a decrease in spending over time, and it’s a decrease that you yourself, I’m assuming, voted for in Paul Ryan’s budget in 2011 and in 2012. He had that same number in his budget. Didn’t you vote for that?”

“But now you’re criticizing something that you voted for twice, right?” O’Brien continued. “I mean, essentially, you voted for it.”

“Soledad, it’s a totally different approach,” Chaffetz replied, adding that Republicans didn’t simply “copy” what Obama had done and that it is an “oversimplification” to say that their plan includes, as O’Brien put it, “those same exact numbers that Republicans are bashing.”

“Well, I mean, listen,” said O’Brien. “You and I have both, I’m sure, spent way much more time than we should have reading the CBO reports over the last couple of weeks, I’m positive. But at the end of the day, that same number crunching was voted on by virtually every single Republican in 2011 and then again in 2012. That is fair to say.”

On the issue of vouchers, a visibly frustrated Caffetz told O’Brien that “I love being on your program, but I’m sorry. But it is not a voucher program. It is not. It is premium support. And that is different than a voucher program. And every time somebody says that ‘oh, it’s a voucher program,’ it’s false, it’s misleading, it’s derogatory, and it’s inaccurate. That is not what it does. For those that are 55 years and older it does not change the program for them.”