O’Brien And Priebus Clash Over Whether She Takes Obama To Task: I Ask ‘Tough Questions Of Everyone’
Video

O’Brien And Priebus Clash Over Whether She Takes Obama To Task: I Ask ‘Tough Questions Of Everyone’ 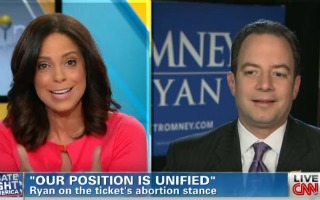 Starting Point host Soledad O’Brien conducted a rather heated interview with RNC chair Reince Priebus on Thursday morning. She asked Priebus, at one point, to weigh in Paul Ryan‘s recent response to a reporter in Florida asking about abortion, saying that people will “find out” about the ticket’s position during the debate.

Priebus answered by noting that there’s “no doubt” that both Romney and Ryan are pro-life, adding that “I see the flap over this Des Moines Register question. But… there’s nothing there there, there.“

“You don’t think so?” asked O’Brien. “Well, let’s walk through that. Because, I doubt everybody knows it. So, let’s play a little bit of what Mitt Romney said to the Des Moines Register. Because people are talking about it. So, I’m not sure there’s no ‘there there.’ Let’s play that first.”

She then showed a clip of Romney telling the Des Moines Register that he does not intend to pursue legislation regarding abortion that “would become a part of my agenda.” The clip was followed by a statement from Romney campaign spokesperson Andrea Saul saying that Romney would support legislation that would provide “greater protections of life.” Then, O’Brien played a video of Romney saying that he would remove funding for Planned Parenthood from his budget.

“So, ‘I’m going to remove funding from Planned Parenthood from my budget,'” O’Brien quoted. “That would be legislation. The first clip I played, he said there will be no legislation in regards to abortion that I’m familiar with that would be part of my agenda. That sounds completely contradictory to me. How’s it not?”

“Well listen, you spent all this time setting up the question and I appreciate that,” he replied. “But the fact of the matter is that what he’s referring to is whether or not there were piles of legislation in the Congress, what specific bills in the Congress in regards to abortion are you going to be pushing over the next four years-–”

Later, after the two began talking over one another regarding whether Romney’s message has been consistent, Priebus told O’Brien the following:

“…Which we do all the time,” she responded, saying that people on either side “hate” her for her questions. “But I gotta tell you, we’re going to ask tough questions of everyone. I don’t care what side they’re on, honestly.”