O’Brien Confronts O’Donnell: You ‘Throw The Word Socialist And Marxist Around,’ Unanchored By Definitions 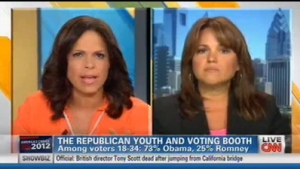 On Monday, Christine O’Donnell appeared on CNN’s Starting Point, where she discussed inspiring a new generation of “troublemakers” and was confronted by host Soledad O’Brien over referring to herself as a “policy wonk,” as well as over accusations that she essentially stole her Tea Party vs. Occupy debate idea.

RELATED: Christine O’Donnell: Comparing ObamaCare To RomneyCare Is Like Comparing ‘Motel 6 To The Four Seasons’

“Why do you think they’re Marxist?” asked O’Brien. “I mean, you just kind of throw the word socialist and Marxist around, that are not necessarily, I think, anchored in definitions of socialism and Marxism. So give me the definition.”

“They absolutely are,” said O’Donnell, pointing to comments about, for example, “sharing the wealth” and “economic equality.”

“And these sound bites might sound good and noble on the surface,” she continued, “but the problem is there’s quantifiable data that prove that they simply don’t work and we’re a free market economy that’s supposed to empower the individual, let each person use their gifts, use the rewards to create a better life for themselves instead of what Barack Obama is posing, a tax code that punishes hard work, a tax code that reduces everybody to exactly the same.”

Later, O’Brien asked O’Donnell about a comment she’d made earlier on referring to herself as a “policy wonk.”

“So, you’re a policy wonk now?” she asked her guest. “When did that happen?”

O’Donnell then described herself as a “policy junkie, political junkie.”

O’Brien then referred to allegations that O’Donnell stole the idea for her debate (which she is doing along with Current TV’s The Young Turks from someone else, a claim O’Donnell disputes.