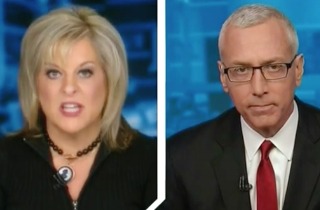 Nancy Grace tonight revisited one of her passions: loudly decrying how dangerous pot is to the public based on several isolated incidents. And this time, she ended up sparring with her fellow HLN host, Dr. Drew Pinsky over cases where people ingested pot cookies and then something horrible happened.

NORML’s Norm Kent told Grace he’s getting tired of her spreading this really unfair message that pot is evil. He said, “Your argument is not real because you take isolated instances of aberrant behavior and try to make them standardized for all marijuana users. And once and for all, Nancy, have you no conscience?”

Grace shot back, “I was really just looking for an answer to the question, but obviously you’re stoned.”

RELATED: Nancy Grace Battles 2 Chainz over Pot: Why Won’t You Think of the Children?!?!

Unfortunately for Grace, Dr. Drew wasn’t exactly on her side on this. In the case she cited, he argued that THC in the system doesn’t necessarily prove pot’s to “blame,” and actually backs up his argument that he was suffering withdrawal from other drugs.

They fought over this point for quite a while, and Grace thought she caught him by playing footage of Dr. Drew saying a while back that pot can be dangerously addictive. Dr. Drew insisted they can talk about addiction all they want, but that’s irrelevant to whether marijuana should be legalized and whether it’s a good or bad drug.

And while Dr. Drew said he isn’t quite lobbying for pot to be legalized, he did say if we’re going to start classifying drugs as bad, then alcohol and tobacco should be illegal.

Grace also posted some pretty weird tweets directed at Dr. Drew. This is by far the best one: