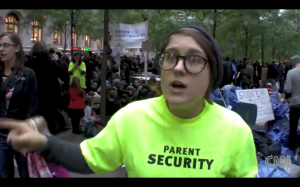 On Friday night, while many families stayed home, went to movies, or checked their Facebook accounts together, a group called “Parents For Occupy Wall Street” was organizing a massive sleepover in Zuccotti Park, where the OWS movement is currently being staged. The group, run by Kirby Desmarais (“The idea is to let parents have a voice in Occupy Wall Street,” she told Mother Jones’ Josh Harkinson, “because normally they cannot be here and also be at home taking care of their families.”), has good enough intentions: it provides ID, makes people register, and allows parents to protest while spending time with their kids. The area cordoned off also asked people not to smoke and had some music for the kids to dance to. But with Occupy movements getting a little…clash-y with police across America, and with temperatures dipping into the 40s on Friday night, inviting the little ones to come out and protest might not have been the best idea. A roll of duct tape was lobbed into the group of protesters, and the police told the parents to go home at around 5:45 a.m., when a man climbed a structure and began demanding a meeting with Mayor Bloomberg.

One mother at the protest, Zoe Kashner, had a unique approach to explaining to her kids why they were at a protest a chilly Friday. After slapping a sign on the backpack of her unwitting five year-old, she boiled down the idea of the protests to a simple-to-explain — although very debatable — manner:

She’d found the concept of theft the easiest way to explain the protest to her youngsters: “They’re like, ‘They steal people’s money?’ I’m like, ‘Yeah.’ Even kids get that it’s not fair.”

A kid would probably love the idea of heading to a protest. To them, it’s just a big party with a bunch of people, some music, other kids their age, and some food. Once in a while you get to repeat the words that some adult in the middle is saying. They get to see flashing lights and hear sirens. And for city kids, the idea of sleeping in a tent under the stars is an experience that doesn’t happen very often. But for all the precautions Desmarais could have taken, there’s always going to be the element of rowdiness there that isn’t present at, say, a Sharon, Lois, and Bram show. The man climbing the structure could’ve instead flipped out and run through the crowd of kids. More than just a roll of duct tape could have been thrown into the group. Bar-hoppers walking by could have exposed the kids to more than their parents had bargained for. Protesters wanting their occupation of Zuccotti Park to last indefinitely might want to take note of the group: because if one kid gets bloodied by an errant roll of duct tape, it might be all the authorities need to “clean the park” and kick everyone out.

Video of the Parents For Occupy Wall Street takeover of Zuccotti Park is below, courtesy of CNN: