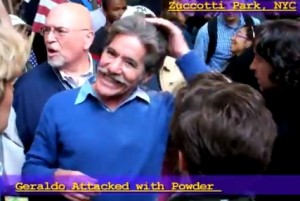 The ongoing Occupy Wall Street protests continue to produce compelling viral video clips, many of which are related to Fox News. The latest such clip, in which a rainbow-hatted man dumps a bag of powder a source tells Mediaite Managing Editor Colby Hall that it was strawberry drink mix from an MRE) on Geraldo Rivera, functions as something of a Rorschach test, depending on how the viewer feels about the Occupy movement, Fox News, or Geraldo Rivera. It gets a little weird when those prejudices mix. The incident is also noteworthy for its new media-age blanket coverage, as it was captured from several angles.

One version of the incident is the top story over at Glenn Beck‘s The Blaze, posted by Naked Emperor News, who customarily prefers to do all of her commentary in the headline. This one is a mixed bag, proclaiming, “‘We Ended The War In Vietnam’: Geraldo Has Powder Thrown on Him at Occupy Wall Street, Is Threatened With Being Set on Fire…and Still Kisses Up to Crowd When Fox Cameras Are Not Rolling.” (note to NEN: when your headline has to be broken up into chapters, it’s too damn long)

The Blaze‘s video is the longest clip currently available, and while it does show one guy chanting “Fox…liar! Set your ass on fire,” you can see the protesters around Geraldo rolling their eyes. After the man in the rainbow hat dumps the powder on Geraldo (which isn’t all that clear in this video), you can hear the protesters’ overwhelmingly negative reaction to his actions, as they shout, “Who did that? Get him out of here. We don’t do shit like that!”

Listen carefully, though, and you can also hear someone else in the crowd instantly conclude that the powder-bomber is a “Fox News employee” and a “plant.”

Geraldo goes on to advise the protesters, “Don’t let the jerks steal your movement,” then responds to one protester’s declaration (amplified through the OWS “human PA system”), “You work for Fox News, we do not support you,” by relaying his own experience as an anti-war protester in 1969:

Gateway Pundit‘s Jim Hoft declares that Geraldo was “attacked” by “one of the goons” at Occupy Wall Street, and has video of another angle of the “attack,” in which you can also hear protesters apologizing to Rivera:

The folks at the Fire Andrea Mitchell blog just thought it was funny that Geraldo got “powered” by the “protesters,” then “leads them in chants.” Actually, the Occupy Wall Streeters weren’t being led in a chant by Geraldo. They’ve developed a system whereby the crowd repeats what a speaker is saying so that everyone can hear it, in lieu of amplifiers. I’m waiting to see what happens when a speaker sneezes. FAM also points out that Sally Kohn, who has appeared on Fox News, was on the scene, albeit with a heavy dash of homophobia.

Still, the reaction from the crowd wasn’t uniformly Kum Bah Yah, as this third video shows. Although some in the crowd urged the powder-thrower’s removal, this angle shows that the man remained, and got at least some love from members of the crowd:

One major takeaway from this incident is the degree to which blind hatred of Fox News can undermine your legitimate points. Even if you grant that Geraldo was trying to give them a fair shake, the protesters who express distrust of his employer have some foundation for that. Recommending the immolation of, and throwing powder on, Geraldo Rivera undercut that point.

Rivera handled the situation well, and appeared to engage in a productive dialog with the protesters, for which the conservative blogosphere promptly punished him.

The other thing I find fascinating about this relatively mild (thank goodness) incident is that it was captured from so many angles. We are rapidly approaching a time when it will be possible to reconstruct every moment of our lives in Matrix-style bullet time. Even with that kind of omniscient media gaze, though, the essential truth of a moment can still be muddied as easily as ever.