O’Donnell Blames NRA For Delay In Boston Investigation: ‘In The Business Of Helping Bombers Get Away’ With Crime 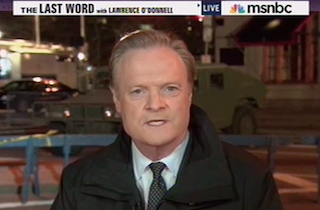 At the top of his show last night, Lawrence O’Donnell, in recapping the progress the of the investigation into the Boston Marathon bombing, linked the attack to the National Rifle Association. The investigation could be going faster and smoother, he asserted, were it not for the NRA being “in the business of helping bombers get away with their crimes.”

Citing the new developments in the case, O’Donnell asserted the investigation “could be moving faster were it not for the successful lobbying efforts of the National Rifle Association.”

“The NRA’s efforts to guarantee that American mass murderers are the best-equipped mass murders in the world is not limited to murderers who use assault weapons and high-capacity magazines. The NRA is also in the business of helping bombers get away with their crimes,” he continued.

“Gunpowder could be traced by investigators to a buyer at the point of sale if gunpowder contained a taggant, an element that would enable tracing of the purchase of gunpowder. But thanks to the National Rifle Association, identification taggants are required by law only in plastic explosives. The NRA has successfully blocked any requirements for such taggants in gunpowder. So such supremely helpful evidence as taggants are not available to the FBI in this investigation.”

O’Donnell went on to report on the new photos and details that had emerged from the investigation, also adding a mention to the fiasco that was yesterday’s cable news coverage of the nonexistent arrest of a bombing suspect.

On that front, however, reports this morning say authorities have clear video of two suspects and plan to release the images on Thursday to elicit the public’s help in gathering information.