O’Donnell Blasts Gingrich: You Owe Us An Apology For Being ‘Completely Wrong’ About Tax Hikes In The ’90s
video

O’Donnell Blasts Gingrich: You Owe Us An Apology For Being ‘Completely Wrong’ About Tax Hikes In The ’90s 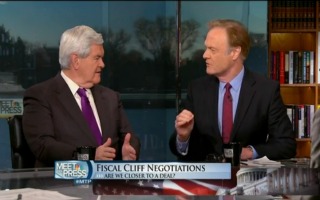 On Sunday’s Meet The Press, Lawrence O’Donnell slammed Newt Gingrich for claiming, nearly 20 years ago under then-President Bill Clinton, that tax hikes would damage the economy. O’Donnell told Gingrich, “Those of us who were working on the other side of that tax increase, Newt, have been waiting for your apology for 20 years for being completely wrong about that.”

Host David Gregory asked both men what a fiscal cliff deal might look like. Gingrich stated he didn’t think the GOP would get much of what they were asking for because “the President won.” He went on, “At some point, either you are going to go over the cliff or you’re going to find some kind of dramatic concession to the president.”

Gregory then asked O’Donnell how much room the president might be willing to give. After nothing that Speaker John Boehner has put himself in a difficult position by claiming that tax increases will cost American jobs, O’Donnell quoted back Gingrich from 1993, where he said,

“The tax increase will kill jobs and lead to a recession, and the recession will force people out of work and onto unemployment and actually increase the deficit.”

After being told that he was expected to apologize, Gingrich still said to O’Donnell, “I don’t agree with you,” and and went on to state that “all economic growth occurs after the Republicans take control.” He called O’Donnell’s position that the economy soared under President Clinton “bologna.”