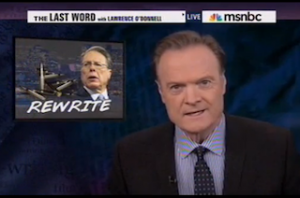 “How many Bostonians wish they had a gun two weeks ago?” That’s the question Wayne LaPierre asked during his NRA convention speech on Saturday. And it was a question that drew the sharp rebuke of MSNBC’s Lawrence O’Donnell, who used his “Rewrite” segment to dismantle the inherent argument within it.

O’Donnell, a Boston native who spent a large amount of time in that city following the bombings, clearly took LaPierre’s words personally. “Wayne doesn’t care about or even know the facts of the Boston case,” he said, evidenced by the fact that MIT police officer Sean Collier had a gun, but “never had a chance to use” it. “He is very clearly saying he believes that a lot of us in Boston two weeks ago wished we had a gun, but he never says what we would have or could have done with guns if we had them.”

When LaPierre said that Boston proved that “good guys with guns stopped terrorists with guns” he is referring to the police. But, as O’Donnell pointed out, “the NRA’s mission is to make sure citizens can outgun police officers, make sure we all have access to even more lethal weapons than police officers can use and afford.”

“Wayne LaPierre’s sleazy, exploitative question, ‘how many Bostonians wished they had a gun two weeks ago’ was spoken by a man that knows nothing about Boston,” he said. “It was appreciated by a relentlessly ignorant NRA audience that knows nothing about what happened in Boston.” Finally, O’Donnell said, we don’t know how Boston suspect Tamerlan Tsarnaev obtained the gun that killed one officer and wounded another, “but we do know getting that gun was made easier–much, much easier–by the life’s work of Wayne LaPierre.”