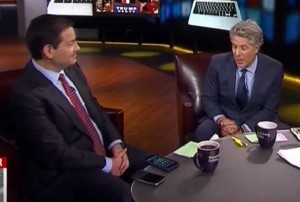 The ineptitude of mainstream political journalism is no longer shocking, but it’s still almost comically egregious. On Wednesday night’s edition of MSNBC’s With All Due Respect, for example, co-hosts Mark Halperin and fill-in Donnie Deutsch tried their hand at analyzing political ads, which is an entirely worthwhile premise, and exactly the kind of service journalists ought to be providing to the viewing public. The problem, of course, was in the execution.

Halperin introduced a new ad by the NRA that falsely claims that Hilary Clinton “doesn’t believe in your right to keep a gun at home for self-defense,” and that she would leave voters “defenseless.” Now, that “defenseless” business is a self-evident characterization, but the former claim is a checkable fact.

After playing the ad, though, Halperin declares it “a pretty good spot,” and even more comically, Donnie Deutsch head-fakes at a fact check, but doesn’t quite get there:

Political ads go under less scrutiny than an ad selling Cheerios. If that was a regular ad, you would have to say “That was a dramatization, that was not Hillary Clinton.”

The fact is, of course, that Hillary Clinton has said, over and over again, that she believes in the right to own guns, and even affirmed her support for the individual right that was upheld under the Supreme Court’s District of Columbia v. Heller decision. Where she has disagreed with Heller is in its ambiguity on the subject of assault weapons:

If anything, Hillary has cheated in the direction of the NRA in the past, but on Heller, she’s been consistent, even before the case was decided:

These are not super-secret facts, they are things that anyone could learn simply by watching CNN or reading Mediaite, and they’re certainly the kinds of things that a political journalist should know. That ignorance would come back to haunt Halperin in the very next segment, as he tried to press Donald Trump senior adviser Kellyanne Conway on this exact issue. Conway repeatedly insisted that Hillary Clinton has never clearly said she believes in an individual’s right to bear arms, and repeated the NRA’s lies about Heller, and because he didn’t know these basic facts, Halperin was, ironically, defenseless:

Except that she has, and not always in ways that were pleasing to gun control advocates. In 2008, she ran just to then-Sen. Obama’s right on the issue, saying that she wasn’t in favor of “blanket federal regulations” being “imposed” on states and localities. You’d expect a Trump “researcher” to “miss” that when they go back and look at it, but for a political journalist, such ignorance is inexcusable.