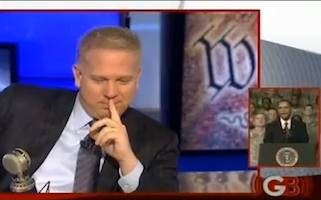 Obama’s speech to soldiers at Elmendorf Air Force base may have been praised by many in the media, but it did not win over Glenn Beck as a fan. Yesterday, Beck’s show was briefly interrupted by the speech. When he returned, he “went off the script” to deliver a stinging rebuke to Obama — and all politicians — who use soldiers as “props.” Wait, Glenn Beck has a script?

In all seriousness, Beck took pains to be even-handed in what could have been yet another anti-Obama screed. Rather than spitting out a one-off about how Obama was such a terrible guy for using soldiers as “props,” he launched into a broader message about Astroturfed diversity being used in photo-ops:

Politicians are using us as props, and I’m sick of it. Especially when it comes to the soldiers. They are not props. As a guy with a soldier that is currently serving in my family, and somebody with honor … they are not props. 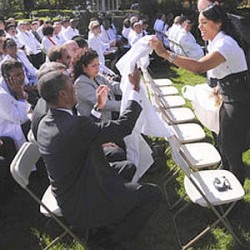 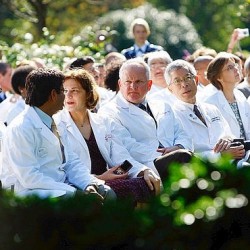 As we discussed last month when the New York Post tried to whip up ‘white-coat-gate‘ into a national story (see above photos, from the Post‘s website), it’s really not news when politicians use a little stagecraft to ramp up their photo ops. Which is why the Post failed miserably in their efforts. As our Tommy Christopher wrote at the time, “Absent this report, would people have assumed that the assembled doctors were suited up to perform examinations on the President?  The fact that the coats were for visual effect is obvious.”

Obvious or not, there’s something to be said about the way that the artifice of photo-ops can feel exploitative, and Beck said it loud and clear.