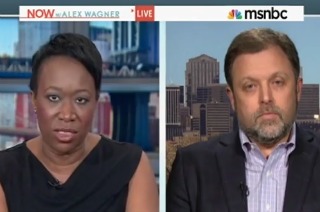 “Do you think we’re ever going to have a real conversation about race in this country?” MSNBC guest host Joy-Ann Reid asked her guest at the conclusion of one of the most self-serving and dishonest segments on the subject of race in the United States yet broadcast on her network.

Reid’s cable news home has taken the occasion of the 50th Anniversary of the civil rights movement’s march on Washington D.C. and Rev. Dr. Martin Luther King Jr.’s iconic “I Have a Dream” speech to, ironically, set race relations back as far as they can. In the name of furthering progress by highlighting injustices – real or perceived – some of the networks’ hosts have set out on a mission to alienate as many minorities from the political system as possible by creating boogiemen and normalizing language commonly recognizable as hate speech by anyone who does not outright agree with the sentiments expressed.

Joining Joy Reid on Friday was “anti-racism activist” and author Tim Wise. In that segment, host and guest attacked some conservative media outlets for calling on civil rights leaders to address the killing of Christopher Lane, an Australian exchange student, by three teens, two black and one white. Those conservative outlets were wrong to ascribe a racial motive to what apparently is something far worse, a perfectly indiscriminate killing. However, those outlets were partially justified in that they were appealing to the dubious precedent set by the media and by a number of MSNBC hosts slash activists who perpetuated the notion – now an article of faith in spite of its lack of any empirical evidence – that the killing of Trayvon Martin by George Zimmerman was racially motivated.

Scared yet, African-Americans? If you’re not, they’ll try harder.

We are not talking about the inability of the American justice system to provide recompense for the family of Emmett Till who, in 1955 was tortured and murdered. No, we’re talking about the inconvenience of long voting lines, forcing voters to cast ballots within 72 hours of election day or to identify each candidate individually, or the indignity of invasive police procedures in high-crime neighborhoods of New York City. Are there racial implications to these issues? I am prepared to concede that there may be, but it is debatable. Logical people can have that debate without impugning the motives of the participants. However, are these issues even remotely comparable to the struggles faced by those who marched across the Edmund Pettus Bridge into a crushing wave of batons and tear gas? Even the suggestion that they are in the same universe is offensive.

The National Review’s Charles W. Cooke said it better than anyone today in his must-read column excoriating the media and the higher education establishment for taking seriously what proved to be yet another racist hoax at Oberlin University in Ohio. In this most recent case, an Organizing for Action volunteer (previously Organizing for America, the activist arm of President Barack Obama’s reelection campaign) manufactured evidence of racism on his campus to drive attention to the cause of rampant racial injustice.

Cooke notes that addressing perceived injustice in America is so pressing for some that incidents of injustice must be fabricated. To stable and well-adjusted individuals, this seems absurd. For others, it is a necessary push to bring about the revolution – an end for which any means are inherently virtuous.

Then there are those for whom racism is spectral, fleeting but pervasive, virtually imperceptible but for the few blessed mediums who can identify it and communicate its meaning to the masses. So-called “dog whistle” racism is an example of this phenomenon, though the “dog whistles” often miss their supposedly intended targets but are somehow clear as day for the finely-tuned racism detectors in our midst. In short, so much of what is decried as racial injustice of today’s America is inflated or invented from whole cloth.

The method by which the architects of fake hate crimes elect to raise awareness is functionally indistinguishable from that of the show trial. As dictators of all stripes justify their behavior on the grounds that the message is more important than are the facts of the case — or, for that matter, than is the sacred innocence of the falsely accused — so the perpetrators of “hate crime” hoaxes have their own elevated ideologies, into whose service real lives must be pressed. Objective truth is just a casualty of the plan — an inconvenience that must be ruthlessly subjugated to the narrative. It would presumably come as an unpleasant surprise to these miscreants that their behavior carries the very whiff of totalitarian mania that they believe themselves to be denouncing. But it does.

“This phenomenon, people maintaining their views regardless of the evidence to the contrary, is inextricable from the peculiar way in which Americans who readily admit that they ‘never thought’ they’d see a black president in their lifetime refuse to alter their assessments of their country’s racial virtue now that they find themselves in a black president’s second term,” Cooke adds in a post which is required reading.

It is sad that MSNBC sees it as their mission to address racial animus by propagating it. People who make money by calling one of America’s two political parties a “white nationalist” party are not furthering race relations. Democrats regularly bristle at the offensive comparisons that some black conservatives draw between the Democratic Party and antebellum plantation owners. And yet, statements like Wise’s are greeted as insightful analysis.

On Friday, the hosts and contributors of MSNBC displayed messages as to how they were working to “Advance the Dream” that King articulated 50 years ago today. But the happy bromides they wrote down on white boards are utterly and completely undone by their actions. Segments like these do not advance the dream, they destroy it.