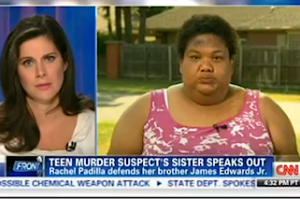 The sister of 15-year-old James Edwards, Jr. appeared on CNN’s Out Front with Erin Burnett Thursday night, sharing her reaction to the news that her brother is one of the two Oklahoma teens accused of shooting and killing Australian Chris Lane. Rachel Padilla described her “shock” at hearing her younger brother had been charged with murder.

“It’s hard to believe, and it’s just really taken a toll on me,” Padilla told Burnett. Asked about the disturbing messages her brother had been posting on the internet, she said, “I knew he had a Facebook page, but I never looked at it. And it’s hard to believe that he will be–that he would even put things on there like that.”

In terms of speculation about Edwards’ “racial” motivation for committing the alleged crime, Padilla said “I know that he has a lot of caucasian friends with whom he hangs with, and the only way that I would feel that he would say anything racist about anybody is because we have felt racism from some of the people here in the community.” Given that Edwards is not believed to be the one who pulled the trigger, Padilla said she doesn’t know why he has been “charged with first-degree murder when he wasn’t the one who shot and killed the guy.”

Padilla admitted that her brother had been in trouble for fighting in the past, but maintained that he’s “never been a vicious person” and she doesn’t “feel in my heart that he would go to such extents to take an innocent life.” She said as far as she knew, he was not associated with any gangs, but she did say he “hung around older people that were affiliated with gangs.”