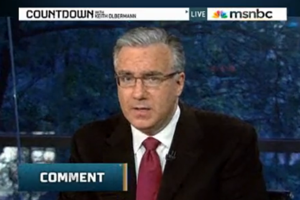 Keith Olbermann‘s Special Comments are as hit-or-miss as it gets in cable news. Some of them manage to get at the heart of controversial matters that affect millions in a touching way. Others make you wonder whether Ben Affleck snuck on the set and reprised his SNL impression of Olbermann without anyone noticing. Last night’s comment on the BP oil spill– a topic on which Olbermann could have easily slipped into over-the-top rhetoric– manages to eloquently express the frustration Americans feel without turning the disaster into more meaningless cable news fodder.

Olbermann addressed the President personally, asking not so much for more action against BP to get them to speed up the cleanup in the Gulf of Mexico, but for the President to give the American people more confidence that he understands the magnitude of the damage, is personally repulsed by it, and will do everything in his power to make it stop:

“We aren’t expecting you to solve it personally, sir. We don’t expect you to jump into a wetsuit and dive in. We don’t want you to move to Roberts, Louisiana until further notice. We would, I think, like a little of our anger articulated, especially by the least angry man in American politics… Mr. President, we have had enough of multi-national corporations treating this irreplaceable earth like it is a kid’s home chemistry set and they are a bunch of not-very-conscientious fifth-graders. And we would like to know in our gut that you have had enough of this, too.”

Yes, Olbermann makes partisan points (for example, he wants all offshore drilling stopped until safety measures are evaluated and found to be adequate, something many on the right oppose), but as a partisan commentator, he has a right to, and there’s a difference between expressing a partisan opinion and hacking away at a serious topic in order to fuel an old grudge. Olbermann does not do the latter here, and expresses something many analysts on both sides as well as the general public seem to be attempting to express.

The clip from last night’s Countdown below: