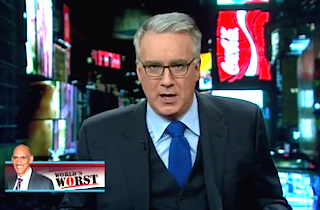 Former Indianapolis Colts coach Tony Dungy was the winner of Keith Olbermann’s “World’s Worst Person in Sports” Monday night after he said this week that he would not have drafted Michael Sam, who will likely become the first openly gay man to play in the NFL this fall.

Olbermann contrasted Dungy’s new comments to ones he made back in February of this year ahead of Sam being drafted by the St. Louis Rams. “The NFL has always been based on merit and I think that will continue to be the case whether it’s Michael Sam and the issue of homosexuality or anything else. Guys who produce and play well will be welcome in the league,” he said.

“Tony Dungy just admitted that Tony Dungy wouldn’t be a skilled enough coach to deal with the distraction of doing the right thing,” Olbermann concluded.