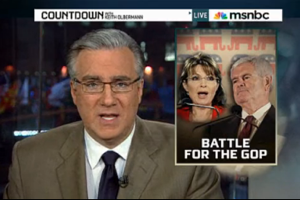 Keith Olbermann covered the Southern Republican Leadership Conference on Friday, complete with video clips from Sarah Palin and Newt Gingrich and the high-brow concern that distinguishes Countdown from many angrier voices on the left. Yes, I know: an extensive Countdown segment on those Tea Party ‘racists’ should not be news. But the fact that Olbermann keeps doing them means that, at least to some extent, they are working.

Olbermann limited his range of political figures in discussion to Palin and Gingrich, and cited polls claiming that “racially resentful” Americans, however that may be defined, are more likely to join the Tea Party movement than those that are not resentful. He sounded the alarm of impending un-American violence from the right and limited his monologue to conservatives such that only middle Americans brandishing Obama hammer-and-sickle signs qualified for the label.

To pin Palin and Gingrich against each other is to ignore a wide range of candidates that may share right-wing sensibilities without being so divisive within their own side of the political spectrum, just like limiting the range of political issues in the Tea Party to race and violence distracts from actual policy concerns involving taxes, health care and foreign policy. What many on the right have yet to properly address, however, is that Olbermann’s attacks are effective because they all contain a nugget of truth diluted in a sea of propaganda, and that’s what makes his tactics dangerously reckless.

Since it isn’t useful for him to distinguish among factions on the right, Olbermann puts the stamp of a prominent radical on the entire movement and diverts attention from Americans who have joined the Tea Parties based on their opposition to big government alone — not based on racism or an affinity to violence. Logic would tell you the sensible members of the party are the majority, but unfortunately logic doesn’t sell on primetime cable news, and Olbermann’s having enough of a hard time herding in viewers as it is. Thus he adopts the political philosophy that “a bad apple spoils the bunch,” which is highly convenient since there are so many apples it becomes impossible to not find at least one rotten one. People like Palin and Gingrich, who do not enjoy universal appeal within the Republican/conservative/libertarian complex, are a godsend to liberals like Olbermann because they do the work of polarizing the right for him.

Of course, what Olbermann doesn’t realize is that, for his aisle of the political spectrum, he is the bad apple himself. There also happen to be plenty of sensible people on the left that listen to and understand the grievances of the Tea Party movement, even if they disagree. But they never seem to be loud enough to drown out Olbermann’s tedious race- and violence-tinged monologues.