Oliver Helps White People Get Stop-and-Frisk: ‘Your Neighborhood is Terminal B at LaGuardia’ 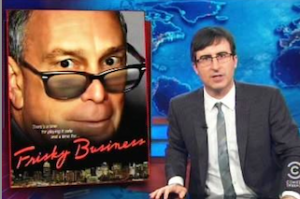 John Oliver opened The Daily Show Tuesday night with a deep dive into the recent ruling by a federal judge deeming the NYPD’s “stop-and-frisk” tactic unconstitutional. Oliver began by giving some background on the controversial program. “For years, opinion has been divided on stop-and-frisk,” he said, “with black and Latino residents of the city saying it’s an invasion of their liberty and white residents saying ‘Oh, I think I heard a thing about that on NPR. Is that still happening?'”

He went on to mock the Judge Shira Scheindlin’s use of the term “indirect racial profiling.” Oliver said, “It’s like a cop saying, ‘should we frisk people outside the Apollo or outside the Jimmy Buffett concert? Tell you what, let’s flip a coin and then head up to Harlem.'”

And on Mayor Mike Bloomberg’s assertion that the judge’s ruling was “unfair,” Oliver said, “Let me get this straight. You think this program is being unfairly stopped and scrutinized even though it’s done nothing wrong? I think I know millions of blacks and Latinos in this city who know exactly how you feel.”

He decided to only address people in the audience to offer up a helpful analogy. “You know how we feel at the airport when the TSA is patting us down unnecessarily, delaying us by looking for weapons which we obviously don’t have and we just want to get to our gate?” Oliver asked. “Well, imagine your whole neighborhood is Terminal B at LaGuardia.”

For more, Oliver turned to Jessica Williams, who took on the role of a reverse Bill O’Reilly by reporting live from “one of new york’s most crime-ridden neighborhoods”: Wall Street. She demanded that police start stopping anyone who may be suspected of being a white-collar criminal: “walking around in tailored suits, slicked back hair, always need sunscreen, if you know what I’m saying.”

“I know this is uncomfortable,” Williams said, “but if you don’t want to be associated with white-collar crime, maybe you shouldn’t dress that way!” She continued, “I hate to say it because I don’t live in their neighborhoods or experience the problems specific to their lives, but it is a hard fact that white-collar crime is disproportionately committed by people who fit a certain profile.”

Williams finished out her report with a warning to a certain type of New Yorker. “So if you’re, say, a white Upper East Side billionaire with ties to the financial community like Michael Bloomberg,” she said, “you’ve just got to accept getting roughed up by the police every once in a while.”