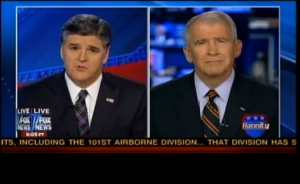 What, Hannity wanted to know, does North make of all the conflicting information coming down from the White House this week? North drew on his own combat experience, noting that, during raids, there is “a lot happening,” and it is often difficult to immediately gain a clear picture of events.

Hannity then turned to the matter of The Photo.™ He quoted President Barack Obama‘s remarks to 60 Minutes, essentially saying that the administration is not trying to “spike the football” by using photographic evidence of bin Laden’s death as a trophy. Hannity then noted that Obama was taking “a victory lap” by choosing to visit Ground Zero this week. (If that wording sounds familiar, it may be because Glenn Beck described the visit in the same manner.) Hannity, meanwhile, believes that the U.S. “needs” to show the photographic evidence of bin Laden’s death and that any potential terrorist who will be driven to hate us by seeing these photos probably don’t have a terribly high opinion of the U.S. to begin with.

North agreed on this point, but responded by offering a reason against releasing the photo that I’d actually not heard anyone share previously: Photos from the raid may, potentially, he said, be used as evidence against the troops involved in shooting and/or killing those within the compound. Said North: “You and I both know this is the kind of thing that happens in this crazy world we live in.” We know he’s dead, he added, photographs or no photographs.

Now, perhaps I’m reading too much into this interview, but it appeared as if Hannity was dissatisfied with North’s responses and was essentially trying to lead his guest into an answer that would serve to criticize the Obama administration and its handling of bin Laden’s body. Case in point: Hannity deemed the bin Laden’s burial “overboard” (LOLiterally!) given that the man some have described as not being a true Muslim was given a burial ostensibly in keeping with Koranic tradition (although there’s been some debate over whether dumping his body into the ocean actually goes against Islamic tradition). North, however, didn’t bite.

Here’s the segment, via Fox News (A warning – this clip contains photos some viewers may find graphic, around the 3 minute mark). Let me know what you think of how Hannity handled his questions to North. Do you think he was angling for a specific reaction?