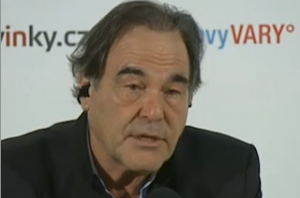 The always outspoken filmmaker Oliver Stone spoke up for Edward Snowden and against President Obama during an appearance Thursday at the Karlovy Vary International Film Festival in the Czech Republic. Stone, who was showing two episodes of his television series The Untold History of the United States at the event, hailed the NSA leaker as a “hero” and declared it as “disgrace that Obama is more concerned with hunting down Snowden than reforming these George Bush-style eavesdropping techniques.”

The Wrap’s Steve Pond reported that Stone shared his views on the Snowden case with the mostly European journalists in attendance:

“To me, Snowden is a hero, because he revealed secrets that we should all know, that the United States has repeatedly violated the Fourth Amendment. He should be welcomed, and offered asylum, but he has no place to hide because every country is intimidated by the United States. This should not be. This is what’s wrong with the world today, and it’s very important that the world recognizes and gives asylum to Snowden. Everyone in the world is impacted by the United States’ Big Brother attitude toward the world.”

Stone urged other “countries to say no to the United States,” adding, “The United States is the dominant power in the universe, with its eavesdropping abilities, cyber abilities … It’s what they call in the Pentagon ‘full spectrum dominance.’ And the world is in danger with our tyranny.”

The filmmaker also recently appeared along with other progressive celebrities in a PSA supporting military whistleblower Army Pfc. Bradley Manning, who is currently awaiting a verdict for charges including espionage and “aiding the enemy.”