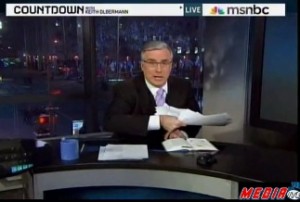 The sudden, shocking exit of Countdown host Keith Olbermann is still sinking in for many, but the true potential measure of the loss is illustrated by a weird coincidence: exactly one year ago today, Air America finished circling the drain, and announced it would cease live programming immediately. The troubled liberal radio network was also the farm system that spawned almost all of the liberals in MSNBC’s current lineup, and Olbermann’s exit is a pivotal moment for their toehold in the media landscape.

The rise of Keith Olbermann as a lone liberal voice in the Bush-era wilderness was closely mirrored by that of Air America, and both were products of a news media that openly admits it took it easy on Bush in the years following 9/11. But while some would have you believe that the media’s pre-9/11 default was liberal, anyone who remembers the 2000 election knows that’s not true. As many of my colleagues have told me, if there’s a bias in media, it is toward the kind of laziness that gets you a President with whom you’d like to have a beer.

The myth of a liberal media bias stems from the narrow-mindedness of those who make the claim, the kind of people who thought it was “liberal bias” not to report on their crazy Clinton body count fantasies. The reality is that real liberal views are just starting to get a toehold in TV news, courtesy of Air America vets like Rachel Maddow, Ed Schultz, and just-named 6pm host Cenk Uygur.

From a liberal perspective, it should be disturbing that all of those eggs are in one basket, and that basket just lost the stool it was sitting on. For all the talk about MSNBC as a “liberal” network, outside of Lawrence O’Donnell and the Air America kids, it just isn’t, not by anyone other than Brent Bozell‘s standards.

With Olbermann gone, and many of his progressive fans feeling angry and alienated by MSNBC, how will Maddow and Co. fare? It’s true that MSNBC is currently the only game in town, and with the terms of their split reportedly keeping Olbermann off of TV until 2012, there’s little chance that will change soon.

But Countdown‘s appeal did not rest solely on the ideology of its host. The show had a decent audience before Olbermann’s emergence as a progressive fire-breather, owing not only to the wit and talent of its star, but to the irresistible format of the show. Ingeniously simple, Countdown was a one-stop shop for news that wouldn’t put you to sleep. Maddow, O’Donnell, and Uygur all have their charms, but Countdown‘s packaging and pacing set it apart. Signature quick-hit segments like “Oddball” and “Worst Persons” contributed to what was essentially a thorough, easily-digested cheat-sheet for the day’s news and politics.

While Maddow and Co. will surely benefit in the short run, they need to recognize that Countdown‘s success did not hinge solely on its liberal point of view, but on its entertainment value. Disenfranchised Countdown fans might tune in initially, but these shows will have to step up their game if they want them to stick around. If they don’t, liberal programming on MSNBC will fade away much quicker than it emerged. The media establishment has proven there’s a short fuse for liberal viewpoints, and it was lit tonight.