On CNN, Combative GoDaddy CEO Explains Why He Killed An Elephant…And Will Again 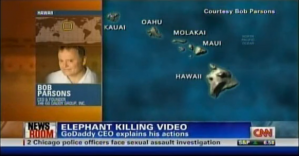 Bob Parsons, the GoDaddy CEO who has been at the center of a firestorm surrounding video footage of him shooting an elephant, called CNN today to discuss why he would do such a thing and, furthermore, why he would allow it to be captured on film. (Here’s our original post on the video, including the footage, which may be too graphic for some viewers.)

Parsons, calling in from Hawaii, explained that the “problem elephant” he killed in Zimbabwe was responsible for trampling crops – crops that villagers apparently completely relied on for food and income. He explained that not only do the villagers no longer have to worry about a pack of elephants ruining their crops once the powerful bull elephant has been killed, but that the elephant remains afford them a good source of protein.

CNN’s Brooke Baldwin pointed out that, while it is indeed legal to shoot elephants if they prove to be threatening crops or humans, there is also a range of other, more environmentally friendly solutions to dealing with problem elephants, like electric fences or – believe it or not – honey bees.

Parsons scoffed at these suggestions, saying that there is no electricity available for an expensive, time-consuming electric fence, and that he simply can’t imagine honey bees being a solution.

Ok, fair enough. But why put the video up? And why add, well, a rock ‘n roll soundtrack? Surely this seems to be in poor taste and, from a business standpoint, a move that is nearly guaranteed to upset or offend clients. Parsons, however, says that he simply wanted to educate people on how impoverished Zimbabwe happens to be.

Parsons seems to grow more defensive as the interview goes on and, well. We’re not so sure how that helps his case. In any case, check out the interview for yourselves, via CNN. Do you buy Parsons’ explanation?