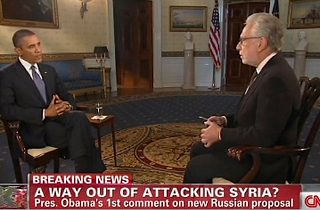 The president added that Syria’s allies in Iran and Hezbollah could “potentially” engage in strikes against the U.S., but that those threats would be of the sort “that we deal with on an ongoing basis.” However, he reiterated, “the notion that Mr. Assad could significantly threaten the United States is just not the case.”

Asked by Blitzer to look directly into the camera and address Assad, the president said, “I don’t need to talk into the camera. I suspect he’s got people who will be watching this,” before warning the Syrian president:

“We need a political settlement so that you’re not slaughtering your own people, and, by the way, encouraging some elements of the opposition to engage in some terrible behavior as well. What I’m thinking about is, right now, though, how do we make sure that we can verify that we do not have chemical weapons that can be used not only inside of Syria, but potentially could drift outside of Syria.”