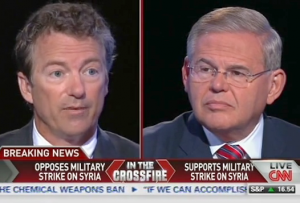 The new Crossfire debuted on CNN Monday night, with hosts Stephanie Cutter and Newt Gingrich taking on Senators Rand Paul and Robert Menendez over Syria. Paul argued drawing the red line was a mistake on Obama’s part, while Menendez insisted that acting in Syria is critical, because if the United States looks the other way on chemical weapons, that would set a bad precedent for nations like Iran whom the U.S. has threatened about developing nuclear weapons.

Gingrich brought up John Kerry‘s comment about an “unbelievably small” strike as well as the president saying earlier on CNN that Assad can’t really threaten the United States. Menendez said it really depends on “how you define threat,” and warned if the U.S. does nothing in Syria, Iran might think we won’t really do anything to retaliate if they develop a nuclear weapons program. Paul thought it would be far more likely that Israel would get bombed if the U.S. strikes Syria, but Menendez jumped in to press the point about Iran seeing through the United States’ “bluster” on nuclear weapons.

Paul told Menendez the potential tinderbox being set off is why “the president shouldn’t willy-nilly be drawing red lines,” because “the more red lines you draw, and the more you let people go beyond it, the less your credibility is.” Menendez shot back that the red line wasn’t just Obama’s, it was the world’s.

On the question of Obama being “bound by the Congress” if it votes no on Syria, Menendez said the decision is the president’s, while Paul called Menendez and his fellow Democrats out for voting against his amendment to make Congress’ ultimate decision binding.