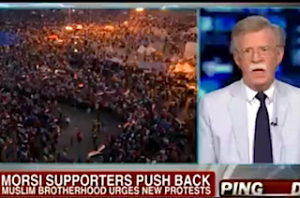 Former U.S. Ambassador to the United Nations John Bolton appeared on Fox News Friday afternoon to issue some harsh criticism on the Obama administration’s response (or lack thereof) to the Egyptian military’s overthrow of the Mohammed Morsi government. Bolton dismissed President Obama‘s “bland statement” on the situation and said he appeared to be “taking a pass” when it comes to Egypt.

As the military in Egypt continues to crack down on pro-Morsi supporters today, Bolton predicted this could mark the beginning of a “very chaotic period” with both sides engaging in violence. He also pointed to seizure of news stations such as Al Jazeera as indication that the “military is fully prepared to go ahead and dismantle the [Muslim] Brotherhood as a party.”

On the White House’s response to the crisis, Bolton said, “There is hardly any evidence at all that the Obama administration has a policy. Obviously in a delicate situation you want to be careful about what you say publicly, but that is different about what you are doing and saying behind the scenes. And what’s curious to me, the administration, after a very bland statement–I guess that is the polite way to put it–has just apparently been inactive.” After outlining the strategic importance of positive U.S. relation with Egypt, he concluded, “the administration just appears to be taking a pass.”

Bolton urged President Obama to keep U.S. aid “flowing” to Egypt’s military and called the president’s decision not to “speak the truth” and call what happened in Egypt a coup “another example of not wanting to face up to the reality we see on the ground.”