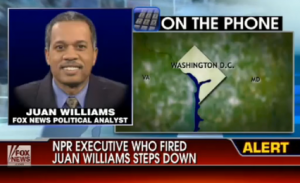 Ex-NPR analyst and current Fox News analyst Juan Williams was on Fox today, talking about the conclusion of NPR’s “independent investigation” into Williams’ dismissal–an investigation that has led to procedural changes at NPR, the decision not to award NPR CEO Vivian Schiller a bonus for 2010, and the acceptance of NPR’s SVP of News Ellen Weiss‘ resignation.

Williams said Weiss’s departure was probably a good thing for NPR–and, he said, for anybody who cares “about news in America:”

I think it is good news for NPR if they can get someone who I think has been the keeper of a flame of liberal orthodox out of NPR. The idea that she was someone who just had the executioner’s knife for anybody that didn’t abide by one single way of thinking, which was her way of thinking. I think she represented a very ingrown, incestuous culture in that institution that’s not open to not only different ways of thinking but angry at the fact that I would even talk or be on FOX. Angry at the fact that people have different perspectives and that a conservative perspective might emerge either on FOX or even NPR. To my mind, this is good news for NPR for people who care about news in America.

Williams was dismissed from his job at NPR after making comments on Fox about feeling uncomfortable when he sees people in “Muslim garb” on airplanes. Weiss was the NPR exec who informed him of his termination, and Williams says, she was inflexible in her conclusions about Williams’ remarks:

She essentially called me a bigot for saying that I feared and felt when I am in airports and about to get on a plane and see people dressed in Muslim garb a moment of anxiety about that presence. That statement she said was evidence of bigotry, that she felt there was no longer any place for me because I crossed the line of her journalistic standards. What I think I crossed was her politically correct line in the sand. When I said to her ‘we can talk about this, have you heard the whole interview with Bill O’ Reilly?’ She said she didn’t need to hear anything else , review anything else. She said there was nothing I could say to her to change her mind.

Williams said he declined to participate–despite NPR’s invitation–with the investigation, fearing that NPR’s committee might be intending to “further defame me in order to justify their actions.”

Williams says the departure of Weiss may allow NPR to move in a new direction, toward unbiased news coverage, and away from what he called an “incestuous” news culture at NPR that focused on one point of view.