On Fox News Santa Claus Just Is White, But on MSNBC…
video

On Fox News Santa Claus Just Is White, But on MSNBC… 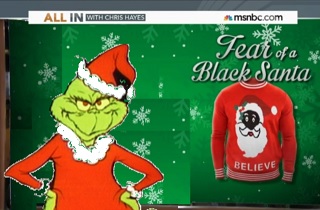 Fox News anchor Megyn Kelly has caused a stir with her emphatic declaration that both Santa Claus and Jesus are purely, verifiably white, but on MSNBC’s All In with Chris Hayes, the reality of Santa’s racial, and indeed his corporeal, identity is quite a bit different. Parents of children may now wish to have their tots leave the room, because on Thursday night’s episode, host Chris Hayes and guest Aisha Harris of Slate revealed something even more horrifying than the prospect that Santa Claus might not be white.

Hayes, to his eternal credit, tried to keep the secret under wraps, but Harris forced the issue midway through a segment about Megyn Kelly’s reaction to Harris’ essay in Slate arguing for a more inclusive Christmas icon than the lily-white Santa we all know and have, at one point, been terrified by.

Hayes teed up the segment with some clips from Kelly’s White Santaclausist rant, and just as Kelly took pains to reassure the toddlers in Fox News’ 9 pm audience that Santa is whiter than an albino in a bag of corn starch, Hayes generously allowed that “out of deference to the same concerns that Megyn Kelly had about children in her audience, we hear at All In won’t present the most rock-solid refutation of the argument that Santa Claus is white,” and added, after a conspiratorial pause, “So you understand.”

Later in the segment, though, after introducing Aisha Harris to discuss her piece, Harris rushed headlong into the danger zone, causing Hayes to sound the alarm once again. “Maybe we should warn parents to turn off the TV right now,” Hayes said, and with another too-brief pause, said “Okay, keep going.”

“Santa Claus is not real,” Harris declared. That’s right, news consumers, your choices are an Aryan Santa on Fox News, or a nonexistent one on MSNBC.

Why would Chris Hayes do this? Why would he risk robbing children of their cherished first encounter with bone-deep betrayal, that moment in time when they’re the last ones to find out that their parents have been engaging in a years-long, psychotically elaborate prank with no logical foundation other than cruelty? It’s a tough world, and every kid needs that M. Night Shyamalan reveal in which they find out that their parents have, for years, decided to forego credit for their own generosity, setting up milk and cookies to consume for themselves in support of the ruse, allowed their children to struggle, late into countless Christmas Eve nights, to stay awake for a glimpse of someone who does not exist, all so that when the game is inevitably revealed, they can be told it was all for fun? “Are you cruel idiots?” you may have wondered. “Who was this fun for? You bought me presents and fooled me into thinking you didn’t, then revealed yourselves to be psychotic liars! You got me! So, what does this all mean for Jesus?”

It would be a simple matter to clue kids in from the start that we’re all pretending, as evidenced by the fact that a game of cops and robbers isn’t ruined because kids understand that their decision whether or not to use deadly force is purely hypothetical, but where’s the fun in that? Hayes is correct to allow parents the choice to maintain the deception, even if he has a tenuous grasp on the length of time it takes to rush into the living room from the kitchen, hunt down the remote that’s buried between couch cushions, and rescue this precious childhood dream.

Until CNN weighs in, though, we are left with the longstanding authoritative rule book on the existence and character of Santa Claus in America, New York Sun scribe Francis Pharcellus Church‘s response to little Virginia O’Hanlon (turn off the TV, kids. Virginia is dead), whose friends clued her in about Santa. I won’t reprint Church’s “Yes, Virginia, there is a Santa Claus” in full, because God knows the Sun needs the web traffic, but here are the bullet points:

He exists as certainly as love and generosity and devotion exist, and you know that they abound and give to your life its highest beauty and joy.

Nobody sees Santa Claus, but that is no sign that there is no Santa Claus.

The most real things in the world are those that neither children nor men can see. (Note to Fox News: This is at least as catchy as “We report, you decide”)

he lives, and he lives forever.

So there you have it, Virginia and Chris and Megyn. There is too a Santa Claus, and he is not necessarily white. Merry Christmas.