On Hannity, Kirsten Powers And Guest Clash Over Whether Obama Has ‘Marxist’ Disdain For Women 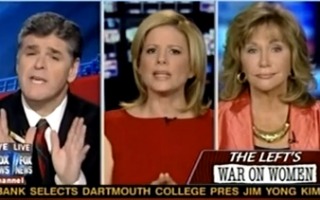 Fox News host Sean Hannity invited contributors Kirsten Powers, a columnist at the Daily Beast, and Sandy Rios, the VP of Family-PAC Federal, to his show Monday night to discuss Hilary Rosen‘s comment about Ann Romney. Hannity felt Rosen’s remark that Romney had “actually never worked a day in her life” had meant to be condescending and played into the left’s narrative on “class warfare.”

Powers attempted to frame the argument surrounding Rosen’s comment as part of an ongoing and wider-ranging “mommy war,” but Hannity didn’t buy it.

Rios then chimed in with her thoughts regarding President Barack Obama‘s supposed take on this issue, echoing comments she’d made to Megyn Kelly earlier that same day:

I have to say that, President Obama, we’re assuming that he disagrees [with Hilary Rosen’s comment]; I don’t think he does. He was raised in a family… his father was a Marxist, his mentor was a Marxist. The Marxist theory on women is that they should work just like men. There was a total dripping disdain for women who stay at home and take care of their children. And women in America who are sort of friendly to the left’s policy need to understand this. This is not an accident. This is what they believe. They hold people like Ann Romney and others of us that have stayed home with our children in complete disregard and disdain and they want to rewrite and remap the natural family.

Powers later disagreed with Hannity’s assertion that the left remained quiet after Rosen’s comment, prompting Hannity to ask whether they just “put up with” with HBO host Bill Maher and his commentary on the issue. She also took Rios to task over her comment regarding Marxism, noting that neither she as a left-wing woman nor President Obama subscribe to the notion that women who stay at home to raise their children should be met with disdain.

“You prove that he does believe it, actually,” Powers countered, later adding, “You don’t know what you’re talking about.”

Have a look at their exchange, via Fox News: