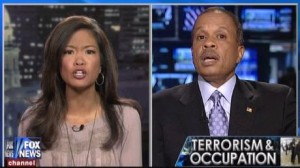 Sean Hannity brought in Michelle Malkin and Juan Williams to discuss the Occupy movement on Wednesday night. As Hannity and Malkin criticized the movement’s violence, Williams defended it, pointing to Tea Party racism — an assertion that sent the segment spiraling into a fiery clash with Malkin.

The problem, Hannity said, is that President Obama and Nancy Pelosi “praised the movement at the time,” even “though from the very beginning, we saw a rape, protective tent being set up for women in New York. We saw violence in a number of these movements.”

Williams said, “I don’t think they’re praising what you think they’re praising, Sean.” There hasn’t been much support for people who are “psychiatric cases,” he said. Hannity then played a clip of Obama saying the movement “expresses the frustrations of the American people” and Pelosi saying, “God bless them for their spontaneity. […] It’s young. It’s spontaneous. It’s focused. And it’s going to be effective.”

Immediately, Malkin tore into Pelosi’s assertion and criticized what the movement has been:

Let me correct Nancy Pelosi, that there is nothing spontaneous about this organized chaos. These occupiers, and the Democrats behind them, can no more disown the violent agitators than they can disown the stench that comes from these filthy encampments. From day one, from its inception, the movement has intended to create chaos. They have openly advocated smashing the state, wreaking havoc on our economy and undermining the rule of law.

Williams responded by bringing up the Tea Party movement. If I was on this show, he started, “and I said the racism in some parts of the Tea Party, or what about the Tea Party person—” before he was cut off by the question, “What racism?”

“Do not slander,” Malkin said firmly, as Williams went on to mention “jokes about monkeys and the president.” Malkin staunchly pressed, “Who? Name me one Tea Party person who said that.”

Amid their overlapping arguing, Malkin bluntly said, “Name it or retract it, Juan.” He responded he doesn’t remember, but advised Malkin to look it up. Nonetheless, Malkin asked whether that’s “tantamount” to calling for violence.

Hannity challenged Williams to give an example of Tea Party racism, mentioning that Andrew Breitbart offered $100,000 for video evidence to prove Williams’ assertions.

Williams said, “I don’t have any evidence,” which, Malkin concluded, is the takeaway quote.