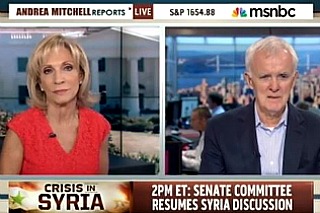 Former Sen. Bob Kerrey (D-NE) joined MSNBC host Andrea Mitchell on Wednesday where he offered a frank and unflattering assessment of President Barack Obama’s handling of the crisis in Syria. Kerrey told Mitchell that Obama had sacrificed the element of surprise early in his handling of the crisis only to dither further by seeking Congressional authorization for military action.

“Since when does the element of surprise become unimportant in a tactic?” he continued. “The uncertainty is a real problem, and we’ve created that uncertainty.”

Mitchell said she was confused by the White House’s decision to dail up the anti-Syrian rhetoric and released declassified intelligence last week only to scale it back this week as they seek a rsolution in Congress for military action.

“The only way you can explain it, it’s indecisive,” Kerrey agreed. “A lack of understanding what the impact is going to be when you make it look like you’re going to attack and then you don’t.”

Watch teh clip below via MSNBC: