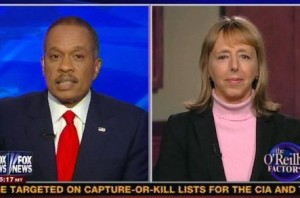 Juan Williams, in for Bill O’Reilly tonight took on Madea Benjamin, the founder of Code Pink, over the assertion that President Obama is a war criminal for the administration’s controversial drone program. Benjamin told Williams that drone strikes make the United States less safe because they end up creating more terrorists as a result of the strikes.

Williams grilled Benjamin on why it threatens Americans when the government sends out drones to take out dangerous terrorists. Benjamin highlighted the innocents killed by the drone strikes, arguing that every time a drone kills an innocent person, more people will start joining al-Qaeda. Williams told Benjamin what she’s saying is “not true,” suggesting that people in these nations would be less enthusiastic about the U.S. military moving in.