Gary Johnson Schools Red Eye Panel On Illegal Immigration: ‘Cream Of The Crop When It Comes To Workers’ 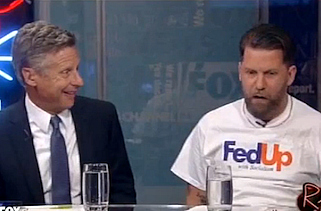 “We’re getting the cream of the crop when it comes to workers from Mexico,” Johnson said. “And I am speaking having been a border state governor. These are hard-working individuals, that are just in pursuit of the American dream.”

McInnes, who immigrated to the United States legally, mimed disbelief. “The cream of the crop, come on! The drunk driving charges! We’ve got all these hidden charges about murder, pedophilia, infidelity—they can’t even hold a family together.”

At this point, McInnes feigned a heart attack. “Maybe in South Chicago or Detroit.”

“He’s right about the statistics,” host Greg Gutfeld said. “Because they’re so scared of being deported, they actually don’t commit crimes.”

“They’re not scared of being deported,” McGinnes said. “They go to City Hall with signs saying, ‘This is BS! I don’t care if you know I’m an illegal! I’m shameless.'”

“They can’t fit all that on one sign,” said Bill Schulz.

“I think attrition is the key,” McInnes said later in the segment. “You just have to make it a little more uncomfortable to employ illegals, and they go home with their tail between their legs in droves.”

“And if you lay this on the employers, it becomes grossly unfair because for the most part they’re presenting false documentation,” Johnson rebutted. “They end up paying taxes that they never lay claim to.”