On The Ed Show, Another Mitt Romney Surrogate Whiffs On Foreign Policy 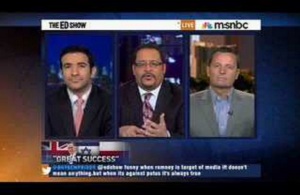 Rick Grenell, the national security spokesman who was drummed out of the Romney campaign by anti-gay bigots, is back, and making the cable news rounds in service of former boss Mitt Romney. On Wednesday night’s The Ed Show, Grenell joined current Romney advisor Kevin Madden as the latest Romney surrogates to utterly fail at explaining Mitt Romney’s foreign policy with verbs, rather than adjectives.

The untold story of Republican presidential candidate Mitt Romney’s Gaffe-tastic Journey to Great Britain, Israel, and Poland is the fact that even absent the gaffes, the trip failed to strengthen his already balsa wood-weak foreign policy credentials. The Republican critique of President Obama’s foreign policy has been a mixture of things Obama shouldn’t have done, things he should have done sooner, or things he should do, but do more of.

The missing ingredient, as the President himself boldly pointed out not long ago, is a willingness on the part of Republicans, including Mitt Romney, to explain what they would do.

For example, the Romney campaign recently sent an email to reporters highlighting what it obviously thought was a gangbusters quote about Romney’s foreign policy vision. Asked by Fox News’ Carl Cameron to “describe the Romney doctrine,” Romney replied, “ “You know, I describe my views on foreign policy as having confidence in our cause, having clarity in our purpose, and having resolve in the application of might if that were ever necessary.  So, confidence, clarity, and resolve.  And so, that means that we should be confident enough to recognize that our principles and values are right, that we express them clearly to the world and to our people at home, and that we have a very high hurdle when it comes to applying military might, but that if we decide that we’ve reached a point where our national security interest is significant and it’s being threatened, that we act with resolve…”

“Confidence, clarity, and resolve?” If I’m hearing Romney correctly, his foreign policy doctrine involves carrying around a stick of Sure deodorant, some Visine, and a spray bottle of carpet cleaner. Saying your foreign policy will be three kinds of good is not a plan.

The flipside of that ectoplasmic philosophy was on display during Thursday night’s Ed Show, when fill-in host Michael Eric Dyson asked former Romney asked former Romney adviser Rick Grenell, point blank, to explain what Mitt Romney would do with foreign policy, not what he wouldn’t do.

Grenell, at first, avoided the question by trying to go back to earlier points, but when Professor Dyson pressed him, asking if Romney gave “any substantive foreign policy insight into the Romney administration,” Grenell pivoted back to the gaffes.

“He has,” Grenell resonded. “I would go back to the fact that most of the reporters were talking about not getting invited into a fund-raiser.”

“Forget them,” Dyson interjected. “I’m asking you to tell me what he (Romney) would do.”

“He wouldn’t do that. He would be clear and consistent,” Grenell said. The whole thing was reminiscent of Samuel L. Jackson‘s Pulp Fiction character trying to get Frank Whaley to tell him what Marcellus Wallace looks like.

The cruel irony here is that President Obama’s foreign policy has been so effective, voters don’t care about the issue. They feel safe. It’s tough to sell umbrellas on a sunny day.