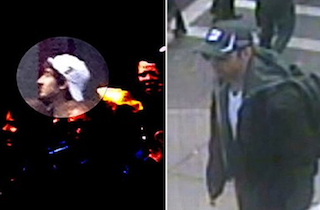 Police have now confirmed that the two men involved in the shooting of a police officer at MIT and a shootout with police in Watertown, Mass. overnight are the two suspects sought in the bombing of the Boston Marathon. One suspect is dead (the one in the black hat), and the other is at large (the one in the white hat), as police have blocked all traffic in or out of Watertown, and ordered residents not to leave their homes. The shootout between the suspects and Watertown police, which ended with one of the suspects dead, was caught on video:

One suspect was shot, and then run over by police, and his body was discovered to have an IED strapped to it. The other escaped by driving through the police cordon, and is still at large. Police have shut down all traffic in or out of Watertown, and have advised residents to stay in their homes, and not to answer the door for anyone but police. The at-large suspect is considered armed and extremely dangerous.

The two suspects began their rampage Thursday night by robbing a 7-Eleven, after which they shot and killed an MIT police officer, then carjacked a Mercedes SUV. Police follwed the vehicle to Watertown, where the shootout occurred. One MBTA police officer was shot in the exchange.

The Associated Press identified the suspects being from Russia and reported that they are brothers. They also reported the name of the surviving suspect:

We’ll update as we learn more…

UPDATE: NBC News is reporting some additional background information about the suspects:

UPDATE II: Both suspects have been named. As reported by The New York Times:

UPDATE III: NBC News reporting that authorities now where the suspect is:

Two unidentified people were taken into custody at the Cambridge, Mass., home where Dzhokhar Tsarnaev and his older brother Tamerlan grew up, but they were not being described as additional suspects. Three dozen FBI agents were ringing the house.

UPDATE V: FBI has released a new photo of the second suspect, as police activity in Watertown intensifies: 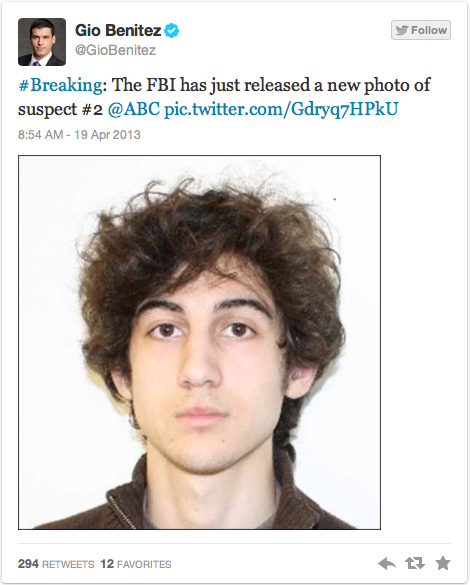 UPDATE VI: The Boston Globe reported the identity of the MIT police offer who was killed in a firefight with the suspects:

UPDATE VII: Reports indicate authorities may also be looking for an accomplice:

UPDATE VIII: University of Massaschusetts-Dartmouth confirms one of the suspects is a registered student at the university:

UMass Dartmouth has learned that a person being sought in connection with the Boston Marathon bombing has been identified as a student registered at UMass Dartmouth.

The campus is closed.

Individuals on campus should shelter in place unless instructed otherwise.

UPDATE IX: Local NBC affiliate reports authorities have recovered an SUV, in connection with the case, in Boston:

UPDATE X: Per Boston Globe: “Authorities cannot rule out the possibility that the suspect is wearing an explosive vest.”

UPDATE XI: Per the AP:

The FBI is at the northern New Jersey home of the sister of the Boston Marathon bombing suspects.

The police director in West New York, N.J., says the woman has told authorities she has not been in frequent touch with her brothers. He says she is very upset.
[…]
They have cordoned off the three-story brick building across the Hudson River from New York City.