Only People Not Taking Benghazi Emails Seriously Are Obama Advisers

Only People Not Taking Benghazi Emails Seriously Are Obama Advisers 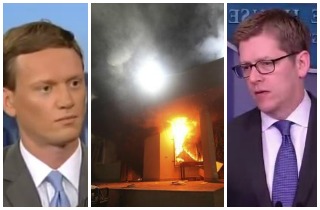 It seems that former and current members of President Barack Obama’s administration are not particularly comfortable with the amount of serious press coverage newly released emails relating to the crafting of the Benghazi talking points are receiving.

The White House has long-maintained that the notion video-inspired protests led a coordinated assault on American diplomatic and CIA facilities originated with the intelligence community. A year’s worth of reports, investigations, expert testimony, and countless hours of congressional committee hearings later, the evidence suggests that this was not the case.

So from where did the claim that a video was to blame for the nonexistent protests that supposedly led to the death of four Americans? A newly revealed email from deputy national security adviser Ben Rhodes appears to confirm that, if this idea did not originate with the White House, it certainly became their preferred narrative quickly.

In a flippant exchange on Fox’s Special Report on Thursday, former National Security Council spokesman Tommy Vietor mocked and dismissed the concerns of those Americans who believe the emails reveal the administration has not been forthright about the process of informing the American public on the impetus for this attack.

The normally staid Bret Baier chided Vietor for being “out of bounds” when, right out of the gate, defensively lashed out at the “ridiculous political game” surrounding the investigation into the crafting of the talking points.

“Try to be straight here,” Baier asked. “Did you also change ‘attacks’ to ‘demonstrations’ in the talking points?”

“Dude, this was like two years ago,” he continued in gracelessly informal display of exasperation. The message Vietor was sending was clearly received: This issue is not serious. You are not serious. And anyone who thinks otherwise is unworthy of respect.

One could be forgiven for thinking that this spectacle has limited implications. Perhaps this was merely one ill-prepared former official who is not representative of the administration’s thinking. But the White House does not deserve the benefit of the doubt in this case. Vietor is not an incompetent frat boy; he is a savvy political operator and an accomplished public servant with hours of on-camera experience. He was not being careless, he was being calculated.

Vietor was telegraphing a signal this administration has been broadcasting since last May, soon after the original talking points scandal broke. The president himself set the tone by calling the investigation into the talking points a “sideshow” and a “circus.”

At a campaign-like event, Obama later accused the press of falling for a series of “phony scandals” promoted by Republicans. The White House’s allies soon echoed this claim, and dismissed any investigation into the response to Benghazi as evidence of borderline psychosis. This response from administration supporters to any mention of the word Benghazi has become Pavlovian.

Vietor was not the first to display theatrical irritation over the press daring to concern themselves with the latest revelations. In a Wednesday press briefing, and again on Thursday, White House Press Sec. Jay Carney insisted that the latest email about the Benghazi talking points, obtained following a Freedom of Information Act request about the Benghazi talking points, were not really about Benghazi at all.

Must be some of that famous Obama administration “audacity” the White House is always going on about.

CNN host and former White House correspondent for ABC News, Jake Tapper, called Carney’s response “dissembling, obfuscating, and often insulting.” CNN’s John King said it was “risky to make light” of an attack in which three American servicemen and a United States diplomat were killed. The National Journal’s Ron Fournier excoriated Carney and admitted that he was “having Baghdad Bob flashbacks” watching his performance.

For now, the press continues to treat these latest revelations with the seriousness they deserve, in spite of the White House signaling its displeasure. That condition has a tendency to change, however, and the evolution from media concern to dismissal can be rapid.

The original revelations about the Benghazi talking points, compounded by the news that the IRS had targeted conservative groups, were not even one month old in 2013 before the press warned with near total uniformity that the GOP may “overplay their hand.” With Rep. Darrell Issa (R-CA) subpoenaing Secretary of State John Kerry to testify before the House Oversight Committee, we may reach that point again soon.

On Friday, House Speaker John Boehner (R-OH) announced he was considering a special committee to investigate Benghazi. He should pursue this course immediately and divorce the investigation partisan congressional politics. The press can only be mocked and scolded by the White House for pursuing a GOP priority for so long before the pressure becomes too great to withstand.

For now, however, it is the administration’s campaign of derision seems to have missed the mark. Republicans would be well advised to contrast the White House’s childish posturing and insincere indignation with sobriety.

No self-respecting professional appreciates being shamed into taking a position. And that, for lack of a more viable strategy, appears to be the only card the White House has to play.