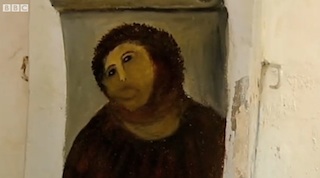 Ok, I see that 99% of you have gone silent (By the way, yes, we here at Mediaite can see you through your computer screens. Most of you don’t wear pants). Well, then I will have to explain. In the movie, there is a sequence where Mr. Bean has to guard the famous 1871 portrait of James McNeill Whistler’s mother. Unfortunately, in all his Beaniness, Mr. Bean stains the portrait’s face, a mistake he tries to correct by hurriedly doodling a terrifying smiley face in its place.

I remember laughing very, very hard at that scene in the theaters back in ’97. I laughed just as hard this morning at this hilarious BBC report about an 80-year-old woman who tried to “restore” a priceless fresco in a Spanish church.

I think you can guess how the story ends.

For more than a century, the Sanctuary of Mercy Church has been home to Elias Garcia Martinez’s Ecce Homo, a beautiful fresco depicting Jesus Christ. Unfortunately, the years have aged the work of art, and the Lord’s face has become deteriorated. So, parishioner Cecilia Gimenez decided to fix things by painting over it.

I’ll let someone else describe it:

“BBC Europe correspondent Christian Fraser says the delicate brush strokes of Elias Garcia Martinez have been buried under a haphazard splattering of paint.

The once-dignified portrait now resembles a crayon sketch of a very hairy monkey in an ill-fitting tunic, he says.”

Oh, man is that funny. You know, aside from the “ruining a historic and beautiful artwork” part.

Check out the video from the BBC below: