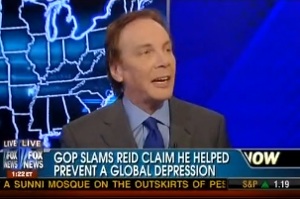 Ever get the feeling that television pundits are more adept at “playing the part” than sharing their honest thoughts and ideas? Well the following video clip of Alan Colmes vigorous defense of Harry Reid‘s spokesman’s statement on Reid’s comment that “but for (him), we’d be in a worldwide depression,’ may support that notion. As host Megyn Kelly was teasing to a commercial (and showing the new dancing Barney Frank advert), Colmes thinks that his microphone is off, and privately shares an aside that’s very different from the rhetoric he’d espoused just a minute earlier.

The topic at hand was Reid’s over-the-top (and clearly hyperbolic) comment that, somehow he’d single-handedly saved the country from a depression. And Colmes, to his credit, is relentless in his defense of what he felt was equally over-the-top criticism; that the GOP was to blame for this dust-up because its clearly not what he meant. Alas, as Kelly threw to the commercial break and giggled at the goofy visage of a dancing Barney Frank, the viewer can hear Colmes whisper an aside to Kelly saying, “If I were Reid’s spokesperson I would have said more what I said, that he was obviously speaking metaphorically,” to which Kelly gracefully interrupts Colmes from further embarrassment. Watch the clip below (edited for time.)

Update – Mr. Colmes graciously points out that his views are consistent throughout the segment (open mic or not) and that the worst that can be said is that he didn’t blast the spokesperson on the air. The headline has been updated accordingly.