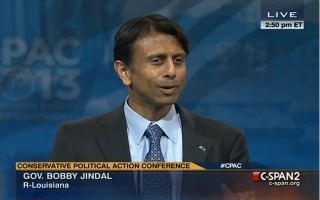 The Conservative Political Action Conference is often a chance for lesser-known Republican politicians to introduce themselves to a broad audience of conservative activists. For better-known officeholders, however, a CPAC speaking slot can also be an opportunity to blow off steam and maybe try out some new material. Louisiana’s Republican Gov. Bobby Jindal sought the latter course when he made light of just about everything and everyone during his CPAC address.

RELATED: Grover Norquist At CPAC: Republicans Who Vote For Tax Increases Are ‘Rat Heads In A Coke Bottle’

“The Gridiron Dinner is, of course, a night for the Washington press corps and the president to kick back,” he continued. “Just generally enjoy each other’s company. Kind of like the president’s interview on 60 Minutes the other night.”

“The Gridiron Dinner used to be known as the night when the media and the administration set aside their differences,” Jindal went on. “Back in the good old days when they actually had differences.”

Jindal said he told President Barack Obama that he had no interest in running for president himself in 2016. “What chance does a skinny guy with a dark complexion and a funny name have to get elected President of the United States?”

Jindal said that both he and Obama were sued by UPS for adopting their slogan during their respective campaigns: “What can brown do for you?”

“I see that [former South Carolina Gov.] Mark Sanford is running for office again,” Jindal said to anxious groans from the crowd. “Mark is so committed to outsourcing he even shipped his wife’s job overseas.”

“It’s great to see the new senator from Massachusetts, Elizabeth Warren,” Jindal continued. “From one Indian politician to another, I want to wish her the best in the United States Senate.”

“I actually ran into Joe Biden earlier today,” Jindal set up. “I’m not sure he recognized me though. He asked me to go get him a Slurpee.”

Jindal added that he wanted to commend the president on his choice for Secretary of State. “Let’s all give Dennis Rodman a great round of applause,” he said.