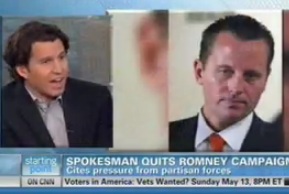 During a discussion of departed Mitt Romney campaign foreign policy advisor Richard Grenell on CNN’s Starting Point Wednesday morning, contributor and columnist for The Blaze Will Cain said something that got my attention. “For the sake of accuracy, let’s make clear,” he said, “this is not about Republicans or Mitt Romney’s campaign being unaccepting of gay people,” but rather, that vocal opponents of Grenell’s hiring “were opposed to his advocacy for same-sex marriage.”

The rest of the discussion centered on alternate, subtextual possibilities for his resignation (it sounds like the guy was a real jerk, if his tweets and resignation statement are any indication), but it was Cain’s distinction that fascinated me, because I know a lot of conservatives who have this notion that opposition to marriage equality (which, Cain went on to say, he supports) and intolerance of gay people are somehow separable. I don’t say this to pick on Will, who is on the right side of this issue, and who is one of the good guys (like my friends Matt Lewis and Ed Morrissey) who try to be a bridge between extremely polarized ideologies. As such, I asked him to explain what he meant. Here’s some of what he said: (full exchange here)

This morning I was first seeking accuracy, because I saw the language of multiple stories saying that Grenell was pressured out for being “openly gay.” I do not think this is what happened and reinforces the narrative that many want to perpetuate – that conservatism and Republicanism is hostile to gay people…period. I tried to point out that Grenell has been open and gay and Republican for some time.

Rather what the pressure was about, was that Grenell was a dedicated gay marriage advocate… This criticism of Grenell makes no sense to me, nor to other conservatives… I personally wish conservatives would embrace gay marriage. But even if they won’t, it seems stupid that someone’s dedication to that issue infects their other positions.

I think it’s possible to be opposed to gay marriage without relying on bigotry or religious zealotry. I think there is a Burkean-traditionalist, cultural-mores-should-change-slowly argument. I also think there is an arbitrariness to the definition of marriage that isn’t resolved by simply encompassing same sex couples. In the end, I don’t personally find these arguments compelling – thus I support gay marriage. But I recognize they aren’t based in bigotry.

Can you be “accepting” of gay people and oppose gay marriage? I don’t know. Uncomfortably maybe. But by this standard virtually all politicians and political parties fail. Is the Dem party unaccepting of gay people?

In the end, I obviously think the gop is on the wrong side of this issue. But this morning I was striving for accuracy, not to save a party or a candidate. And I feel like the narrative is becoming Romney didn’t want (bc some bloggers didn’t want) to be “associated” with an openly gay dude. When we repeat “resigned for being openly gay,” that’s what we’re saying.

I appreciate what Will is saying, and that, as he said in the CNN clip, he’s not trying to excuse opponents of marriage equality, but in my view, the distinction he’s making is nonexistent. Whether it was because Grenell is “openly gay” or simply because he’s a strong marriage equality advocate, his ouster is an indication of conservative/Republican hostility to gay people, from those who drove him from the job, and those who allowed it.

I will concede that it is possible to treat someone as a lesser human being without knowing you’re doing it, or without believing you’re doing it, but that doesn’t absolve you of your bigotry. If you like gay people just fine, but have some religious/cultural/philosophical reason for denying their right to marry each other, you are still denying their right to marry each other. In fact, the inability to tell that you’re a bigot is exactly the kind of ignorance that propels the bigotry.

Conservatives don’t have a monopoly on this kind of ignorance. As Will pointed out, the Democratic Party hasn’t arrived at a full equality position (though I expect they will at this year’s convention), but they’re light years ahead of the Republicans. President Obama himself has gone through an elaborate “evolution” on the subject that I’ve written a lot about, and currently holds the correct political position (that banning gay marriage is wrong) even as he keeps his personal view a “mystery.”

Perhaps the key is to remove some of the stigma from the word “bigot,” meaning a person obstinately or intolerantly devoted to his or her own opinions and prejudices. I used to be a bigot, by that definition, on this very issue. When I first heard about the idea of gay marriage, in the early 90s, it just sounded absurd to me, like jumbo shrimp, or compassionate conservative. I thought it was a capricious demand, something gay people wanted just to have, like a paraplegic demanding a bicycle just because someone else has one. What possible use could they have for it? I just did not get it.

At that time, I said all the stupid things people like that say, like “Well, they can get married, just not to each other, and I can’t marry a dude any more than they can. Boom. We’re equal.”

The first step in my “evolution,” as the President calls it, was to realize that it didn’t matter if I got it. They’re either equal human beings or not, endowed with the same rights, or not, whether I understand or approve of them or not.

Eventually, I came to understand that, duh, gay people want to get married for the same reasons anybody does; because they love each other, they want to raise children together, they want to spend the rest of their lives together and/or bitterly divorce after ruining each other’s lives. My personal view on marriage has evolved, too. Now, I’d advise anyone to run the other way, but I wouldn’t try to make a law against it. If you must get married, just make sure you have an open bar and a decent beef dish at the reception. And I’d like to be able to do some karaoke, if that’s possible.

To be clear, I don’t think a personal view of marriage as between a man and a woman is necessarily bigoted; if you don’t ever want to marry someone of your own gender, you should never have to, and you will always think of marriage that way. Lots of religions strongly prefer that you marry within your faith. That’s fine, as long as you don’t try to make a law about it. If you think same sex relations are yucky, that’s cool; lots of them think we’re gross, too. Just think of it all as a big Doritos factory: it’s nacho business.

I hope the President plans to emerge from his personal gay marriage chrysalis during this campaign by announcing a marriage equality plank in the Democratic Party platform, and I think he will. As people like Will Cain (and many other conservatives I know) demonstrate, the extent to which this is a wedge issue has been inverted.

But I also think that Will, and others, should realize that, whether they think they are or not, people who want to outlaw same sex marriage, to codify that inequality in our state and national Constitutions, are bigots, and they need to be enlightened.