Oprah On OWN: ‘Had I Known That It Was This Difficult, I Might Have Done Something Else’
video

Oprah On OWN: ‘Had I Known That It Was This Difficult, I Might Have Done Something Else’ 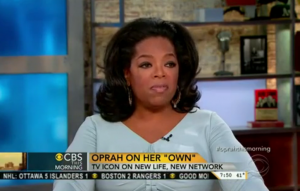 Appearing on CBS This Morning, Oprah Winfrey discussed several aspects of her network, OWN, ranging from the media scrutiny to her own mistakes. Had she known starting a network is so difficult, she admitted, “I might have done something else.”

The segment began with the usual small talk, and quickly pivoted to the topic of her network with the question, “When you set out to create a network, tell me what you wanted to do?”

Winfrey said she wanted to create a channel that did what her magazine does: inspire “people to live their best life.” She continued: “That idea is something that had been stirring inside myself for a very long time. So the idea of creating a network was something that I had wanted to do. Had I known that it was this difficult, I might have done something else.”

Host Charlie Rose asked, “Really?” She would have done something else? “Oh, absolutely,” Winfrey replied. She added, “I didn’t think it was going to be easy, but I did not know — if I knew then what I know now, I might’ve made some different choices. I would say, if I were writing a book about it, I could call the book ‘101 Mistakes.'”

Among those mistakes? “Launching when we really weren’t ready to launch, and doing that because you’d announced that you were going to do it. It’s like having the wedding when you know you’re not ready.”

She was even told, she said, that people wouldn’t want to see her come off a long, successful run with her show, and transition smoothly into running a successful network. “Schadenfreude,” to be specific.

Rose then pointed out, “They’re writing things about you that are not flattering.” Taking a lesson from Steven Spielberg from her The Color Purple days (she was surprised to hear he wouldn’t read the TIME story about himself), she said, if you believe the good stuff then you have to believe the bad stuff. Though she conceded, “Last week, I saw one headline that sort of knocked me off center. It was the USA Today headline that said ‘Oprah Not Quite Standing on her Own.'”

She also pointed out that her “favorite headline ever” is also one from USA Today: “Oprah: The World’s Biggest Classroom.”

Asked why she doesn’t just take what she has and step out of the media limelight, Winfrey said she believes that she has a “calling.” Because she’s an African-American female who’s been so “blessed,” she said, “there’s never gonna be a time to quit. I will die in the midst of doing what I love to do.”

In typical Winfrey fashion, she stated, “because you failed does not make you a failure.” She feels better about the network today, she said, than she ever has.