Oprah Talks Trayvon, Race on CNN: People Think If They Don’t Use the ‘N-Word’ They’re ‘Not Racist’ 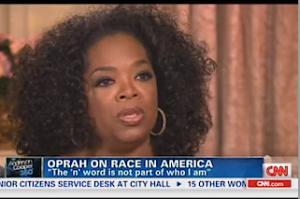 Oprah Winfrey and her co-star in Lee Daniels’ The Butler Forest Whitaker appeared on Anderson Cooper 360 Thursday night to promote their film. During the interview, Anderson Cooper asked Winfrey to relate the historical themes of the movie to the modern day struggles for African-Americans, including the Trayvon Martin case.

Winfrey said she “loves” the film in light of the discussion on race, because it “brings context” to the conversation. She described how the film begins with a lynching scene and ends with walking into President Obama’s office, showing how much has “happened in the span of one man’s lifetime in our country.”

Responding to a question about the juror in the George Zimmerman trial who thought race was not a part of the case at all, Winfrey said, “A lot of people, if they think they’re not using the ‘n- word’ themselves, they actually, physically are not using the ‘n-word’ themselves and do not harbor ill will towards black people, that it’s not racist. But, you know, to me it’s ridiculous to look at that case and not to think that race was involved.”

Weighing in on the “n-word” debate itself, Winfrey said she “understands” why other people choose to use that word, but “it’s impossible for me to do it because I know the history.” She said, “Out of respect to those who have come before and the price that they paid to rid themselves of being relegated to that word, I just don’t use it.”